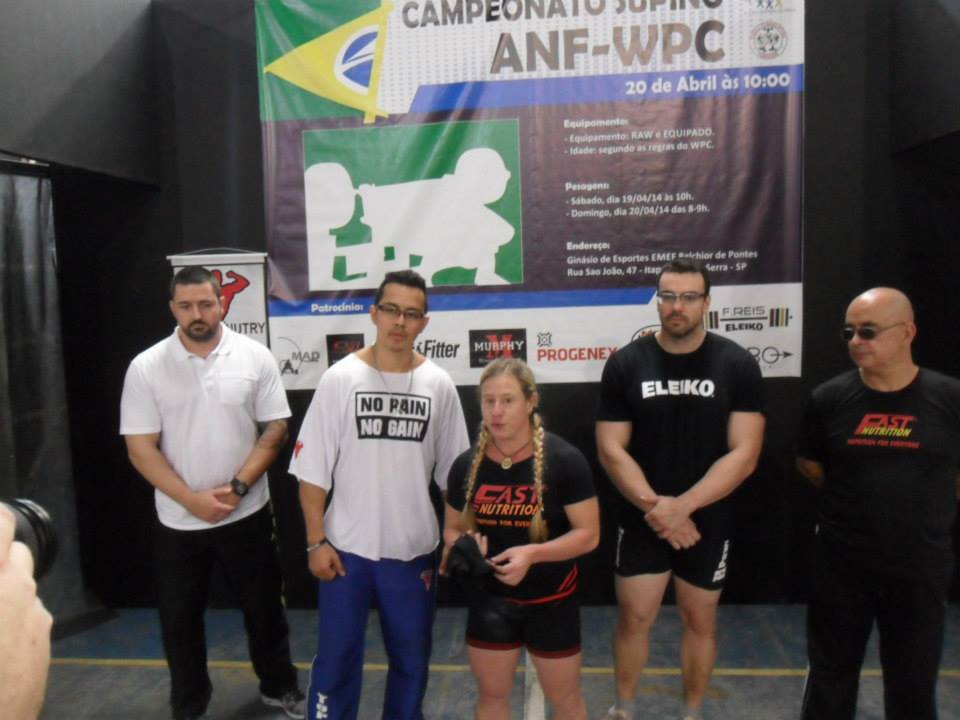 That was the WPC National Bench Press Championship, held this Sunday, April the 20th. The date had a bag full of meanings to me: it would be the first “real” competition I would take part in Brazil. Before that I lifted with the older federation, where, in this part of the world, many weird things happen that affect the nature of the sport itself, and later, I took part on a number of backyard meets, most displaying some type of flag absolutely devoid of normative meaning. In other words, things that resemble powerlifting, but are not.

In 2009 a group of people and myself created an organizational alternative, the ANF (National Strength Alliance), which I gave up on a number of times until finally, in 2013, we managed to successfully hold two impeccable competitions.

From 2011 until last Sunday, I only lifted abroad. I won a couple of World Championships (after all, we had the ANF, so I represented the country even if here I was unable to do anything), broke a number of world records and even a historical record in 2011. I became international referee for two organizations, yet I had not lifted in Brazil yet.

It would be the first time I would get into a properly organized, safe, fair and impeccably well ruled platform here.

It was also my first competition after being released from the hospital. Last December, I was hospitalized with a serious spinal infection called spondylodiscitis. It destroyed the disk between two vertebrae on the lumbar region: L3 and L4. These vertebrae were partly destroyed (osteolyzed) and the only outcome for this condition is what is called an ankylosis. Ankylosis is the fusion of the two partly destroyed vertebrae. This is not an easy or fast process. However, the real problem is the unavailability of data concerning its occurrence in high performance athletes.

I hesitated too much to seek hospital care and only did this when the excruciating pain wouldn’t subside even with oxycodone, I couldn’t move and a slight fever appeared. On my second day at the hospital I developed septescemia. Another interesting close encounter with death.

So, the second meaning for this competition is being meaningfully alive: alive and lifting, since I have no interest in being alive without lifting.

The third meaning was an elegant empirical falsification of the incompetent physicians’ thesis that I would: 1. Remain immobilized for six months; 2. Never lift again. It hasn’t been four months since I was released from the hospital. I never wore the hard corset they prescribed. I tried to wear the other, more flexible one, which only hurt my back. I tried for about a week. In less than a week I was benching. In less than two months I was squatting again. There you are: this is what I call a crucial disproval of a thesis.

Many thanks to my family (my treasure) and the friends who supported me from all parts of the world (Hugo Quinteiro, Andre Giongo, Morgana Buzin, Andre Hohl, Eduardo Saigh, Carlos Daniel Llosa, Felipe and Nathalia Paz, Shawn Lattimer, Joe Smolinski, Howard Penrose, Jack Kottwits, Jouko Kiesiläinen and others that I apologize for not naming here), to my sponsors (FAST Nutrition, Ortesp orthopedics clinic, Dr. Rafael Knack and SUUM) and to my students. Thanks, too, to my ever-present protector who makes himself present any time I’m in danger and then disappears into the mists. Thanks, Angel, you can be complicated, but you’re always there for me.