An age of spoiled and numbed people

Yesterday the reporter made the final arrangements for yet another interview about mental health, suicide and sport. The TV station feels trapped: they are weary of giving people false expectations as to controlling severe neurological and mental disorder without drugs, yet my story sells.

She’s right. My strategy is not for everyone. So I came up with a nice communication recipe: focus on the fact that everything has a price and all action, consequences (including taking no action).

There’s a convenient agreement celebrated in Hell between the Pharmaceutical Industry, mainstream psychiatry and a culture of effortlessness. Of “moderation”. When in pain and misery and faced with the alternative of taking a (magic) pill or a lifetime of extreme hard work in training, enduring pain every day until pain doesn’t feel like pain anymore, strict diet forever, restrictions over what is commonly known as “social life”, etc., the great majority will choose the pill. 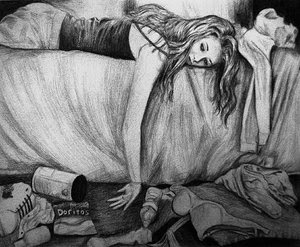 I’ve heard a hundred times things like “I can’t do this” and “it’s too much for me”.

Taking the pill sounds like a non-action, but it is not. It is a decision. Right from the start you can see the consequences (and they are known and published, only not enough explained): cognitive impairment and loss (people become less intelligent, articulate and creative), loss of libido, loss of strength and energy, changes in body composition (people become pathologically fat through dyslipidemia and other side effects).  After years of a humiliating decline in productivity, anyone who needs their cognitive abilities, initiative and energy (and who doesn’t?) for work will go into disability retirement.

So , no, my alternative is not for everyone because most people are either deceived by medical publicity into believing the losses are “not that bad” and are worth the control of their misery, or they don’t care very much about what they are losing.

Either way, I can only see this as a consequence of an effortlessness culture where moderation and energy economy are celebrated.

Also, it is a culture that punishes self-referenced identities. People are someone’s wife, a citizen of a certain country or a member of a certain group. No big deal giving up their intelligence, their sex drive and their strength. They will still be someone’s wife and live in the same country. Just a carcass, but the external references haven’t changed.

Maybe my choice was easier for me because I have lost these externalities a long time ago. I AM my intelligence, my memory, my strength, my sex drive and my self-determination. Take away any of that and I cease to be myself, therefore, I will be dead. It doesn’t make any logical sense to kill myself to avoid killing myself.

It was a pretty easy choice and didn’t take any courage or heroism.