Diet and emotion, diet and love 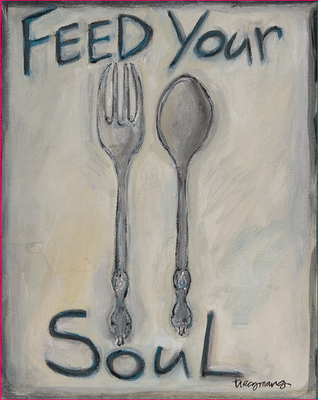 It is almost a non-issue that stress, depression and anxiety will change our feeding behavior. The question is: why? What is behind this? This is not one of those evolutionary psychology-type questions. I believe it is time to really understand why we shift to what retrospectively is an obvious poor choice of food and eating behavior.

Tomiyama et al (2012) have shown that there is an increase in leptin concentration in the bloodstream following a stressful event, which could account for food avoidance, since leptin regulates satiety. This could explain why people can’t even look at food when they have undergone some extreme traumatic experience. This study confirms previous findings (Appelhans 2010) that suggested leptin to “modulate” the well-known “stress eating” behavior, a compulsive seeking of “comfort food” (sweet and fatty food, i.e., calorie dense).

So, why is comfort food comforting? Tomiyama, Dallman and Epel (2011) suggested that it isn’t comforting in general: it is comforting to the already chronically stressed that have established a relationship between calorie-dense food and  hypothalamic-pituitary-adrenocortical (HPA) axis activity. In other words, these people regulate their cortisol levels by developing greater and greater mesenteric fat. They are self-medicating for stress through calorie-dense food, in spite of the fact that on the long term they are creating a more stress vulnerable physiologic condition and living environment.

But what is the emotion being experienced at the exact moment you either go for the fat and sugar or totally avoid food?

I want to share my own experience as an intermittently overweight child (at other times, extremely athletic) and an anorexic adult before finally turning into a high performance athlete, when all this became old history.

I wasn’t exactly the most welcome child in a family. In fact, I was unwelcome and my parents weren’t truly concerned in concealing this. I was a very small baby and the photos don’t show anything abnormal until about four years old. That is when I became aware that my father disliked me and my mother was chronically sad, feeling overwhelmed and annoyed. I was a burden. My presence and my eating were a burden. Soon I became overweight and “people” decided to control my food.

Children basically lack control and I lacked even more. It might sound unbelievable, but this hyperactive super-athletic me was seen by my mother as a lazy inactive girl. Yes: I was terrified and hiding inside a bubble.

So I do remember quite well what it felt like being offered food: I had to eat as much as I could because I had no control over when and how food would be available again. I gulped down whatever I could. I really didn’t care if it was tasty or not. All I cared was how long I would be protected by the feeling of “being fed” (I was measuring satiety, oblivious to the fact that I was a reactive hyper-insulinemic child and the more sugar I ate, the sooner I would be hungry again).

The diet imposed by the adults was an aggression. It was prescribed to me as punishment for being such a lazy bastard, such a burden in their lives and such an “ill-tempered girl”.

At twelve I became a high performance athlete and “magically” had no eating issues. Until I was plucked out of my safe haven, I was fine. I had that strong, athletic body that I have now.

What followed this was a period of complete loss of control. As I was forced to become a member of a political organization, at fifteen, chronically abused (both emotionally and sexually), denied the right to even study or be where I wanted, I resumed my childhood eating behavior. This time with a good reason: I really didn’t know when food would be available, so I overate whenever there was any.

When this nightmare was over, at nineteen, again I became a more or less athletic adult, therefore, just more or less healthy. Mental and neurological disorders had already built their pattern. My eating behavior varied as much as my drug consumption and other harmful behaviors. But I basically had control over available food, so overeating was not really an issue. Anorexia, on the other hand, was.

All this was only really over when, in 2006, I became the powerlifter I am now.

I like food. I really enjoy tasty food. I know I’m a reactive hyper-insulinemic and I control my sugar cravings. I have almost no weight variation over the years.

Those early terrors, though, are still there. They come disguised in different shapes and colors. My first reaction to extreme aggression is still anorexia. I can’t swallow solid food. It is in these times of trouble that the loaded bar (not mother Mary) comes to me, speaking words of wisdom: “you’ve got to feed your Strength because this is all you’ve got”. So I manage to gulp down whey protein and as much water as I can until the pain is numbed. And then I force myself to eat.

At other times, I still feel the urge to gulp down food. I go for meat, raw meat if possible. That happens when I feel trapped or threatened. I need to feed my strength as much as I can because… who knows when protein will be available again? It’s the little abused girl speaking inside my head, her terror in a world she has no control moving me.

I confess travelling still makes me anxious. I don’t know what food will be there and if there is any danger of the wrong food or, worse, NO food, sucking my strength away. Sucking my soul out of me.

Until last week, I designed all my diets. Last week Rodolfo sent me my first prescribed diet. I’m sort of in love with the diet. I don’t want to be away from home because I need to know the right food will be there for me. I’m learning to carry it around, as I did before, and not use it as an excuse not to socialize.

So, what is the meaning of the table with meals and their composition that Rodolfo sent to me? It means, for the first time, I can let go off my control terror and freakiness. There is someone taking care of me. Food will be available, my Strength and Soul will not be sucked out of me and I can just lift and sleep.