Ego lifting: are you using the right expressions and ideas? 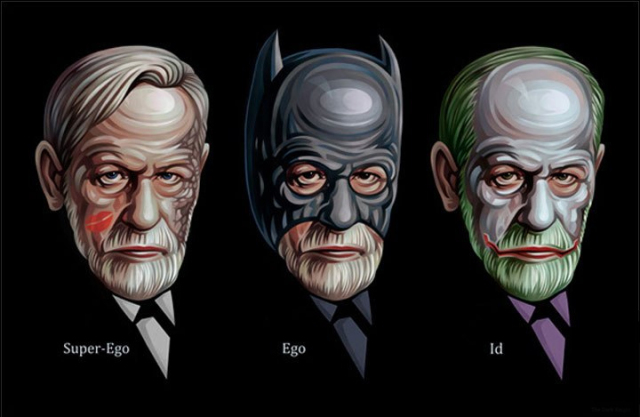 What exactly is being criticized and rejected here? Besides the obvious technical items in training in terms of planning and execution of a motor task, the object of criticism is the emotional attitude. It means “it is a worthless lift performed to satisfy the ego”.

Like so many words and expressions that come from a professional or scientific field, this one is not only used improperly, but its use is clouding our understanding of the emotional factors in lifting in general.

Let’s see what ego means and what people not trained in psychology think it means. The ego is one of the three components of Sigmund Freud’s model of the psyche. Psyche is not a thing, or a physiological structure. When Freud coined these terms, very little was known about the brain, and there was a rapid advancement of studies about the mind. It took decades for the neurosciences to start delving into issues pertaining consciousness. The fields that study the brain and those that study the mind are just now starting to talk to each other.

Anyway, the psyche, or the mind, refer to conscious and unconscious processes that organize human behavior.

In Freud’s model, still pretty much embraced and used by practicing psychologists, the ego is what exists between two very powerful unconscious components of the mind: the id and the super-ego. The ego is what knows itself to exist. In other models it is called the “self”.

In Freud’s model, the Id is the deep, dark sea of unconscious impulses, desires and instincts. That’s the part of us that is directly related to libido, but also destruction (self-destruction and destruction of others). The super-ego is the internalized set of rules the individual is taught and subjected as he is incorporated into society, as he grows up. That’s the part that directs the person towards meeting expectations, or perfection.

It’s up to the ego to negotiate between the scary, powerful desires of the Id and the oppressive rules of the super-ego, according to Freud. That is what is meant when psychologists explain that the ego is the “self-awareness” part of ourselves (Freud 1933).

A big parenthesis here is that this is one, and the first model of the psyche offered by the founding father of psychology: Freud. By no means it is a consensus.

Other modern formulations of this self-conscious part of ourselves adopts the term “self” to refer to it (Sedikides & Spencer 2007). The self can know itself, be the thing that is known, like itself, hate itself, etc. But there was a lot of conceptual water under the theoretical bridge until whatever modern concept of the self-conscious individual one adopts.

What does this tell us about “ego lifts”?

First, that we should hope all lifts to be conscious (therefore, “ego lifts”). If they are not, we have a problem. I hesitate on sharing an experience of unconscious lifting here because I am aware some people emulate my behavior. So let’s start with “don’t do this, ever”. Once, in 2012, I was very upset and I lifted everything I could, in every possible manner, for seven hours. Of course I had the help of pain killing drugs! Who wouldn’t? We’re talking about seven hours of, first, snatching (around 75-80%), then clean and jerking (same), then some random quick lift assistance work such as drop snatches or overhead squats (heavy), then a dear friend dropped by to discuss his own depression and we did 10 X 10 deadlifts with 100kg (220lbs), then I had a brainstorming meeting with another friend while we did about 200 kettlebell swings and snatches. Seven hours. I was obviously pretty sick the following day. Why did I do such a stupid, reckless and dangerous thing? Because I put my super-ego to sleep (with drugs) and we (my ego and my Id) had a party. Oh, I can assure you I had fun. Too much fun.

Shall we call this “Id lifting”? Or is it still “ego lifting”, otherwise I wouldn’t remember it to write about it? Definitely, the super-ego was sound asleep.

One of the reasons why people who are usually very much “rule by law” people, like myself, go crazy and do stupid stuff like that is because their super-ego has been too overpowering. Or you can explain it with any other model you want – psychology is not a unified field. But something does seem a little off, doesn’t it? A little out of balance? Something the person sneaks out to do, without mommy and daddy knowing (aka the super-ego), or friends (observe there were three sets of friends in the seven-hour lifting, each set unaware of what the others witnessed), or video, or even oneself?

And this case is interesting because it highlights the popular “ego lifts”, which are exactly the opposite: instead of sneaking out to lift stupid, free of repression (and reason), one lifts just to satisfy some watching entity. “Nobody watching” versus “everybody watching”. Whether it is “the world” (through internet videos) or oneself, it doesn’t matter: it is a lift done to conform to rules, to abide to expectations and, thus, to obtain acceptance.

The fact that the expectations are completely unrealistic tells us this individual is suffering from excessive extrinsic motivation, or the need to satisfy “the other”.

Who performs this lift? This suffering individual, haunted by desires and fears he has no idea of, and commanded by social expectations he tries to juggle with all other aspects of his life.

Bottom line is that either all lifts – reasonable, within a program, competitive, non-competitive, stupid, smart – are ego lifts, or none are.

Under the bar, there is always a person consciously satisfying something: a physical sense of well-being, three judges on a platform, potential girlfriends watching an internet video, a sense of superiority over other lifters or just the pleasure of “work well done”.

As I see it, the expression “ego lift” tells much more about the person who said or wrote that in criticizing someone else than about the lift or the lifter. It tells me about the need to exert the power of judgement, of disqualification, of hurting, of shaming, etc. It tells me a lot of things about someone who feels small and inadequate, and who cannot control their impulse to hurt others, especially others who they perceive as threats.