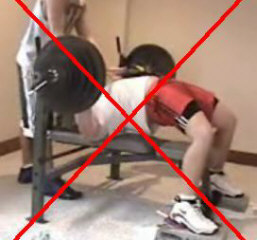 That past weekend I had to red light a couple of lifts because of floating butts. A floating butt is something that always frustrates the lifter to the point of rage: been there, done that, much more than I would like to.

Nobody wants to raise their butt. So why does this happen?

Let’s start by understanding the bench press. Like the other two powerlifts, the bench press is a sports gesture made up of movements recruiting muscle chains in the whole body. If you are reading this, you probably know that already: just as the squat is NOT about legs (“leg day”), the bench press is not about the chest (“chest day”).

The sticking point is where there is a transfer of dominance from one chain to the other.

But the real key to a good, competitive bench press is to efficiently make use of the synergist chains, mostly related to stabilizing the lifter-barbell system so that the levers will function optimally.

The first thing you will hear experienced lifters tell you is to “squeeze your shoulder blades”. That means to keep isometric scapular adduction and depression.

The second important thing for proper stabilization, which unfortunately many people are less aware of, is glute contraction.

Glute contraction plus scapular adduction creates the most stable geometrical arrangement for the lifter-barbell system. They naturally produce a certain level of spine hyper-extension, which may go from the slightest curve to a full arch. As many people wrongly believe, the arch range does not define the good and efficient bench press. Stability does. If the bencher is flexible enough to deliberately arch without compromising stability, that’s great. If not, over-arching will actually hinder the lifter’s evolution.

The famous “leg drive” is a strong isometric contraction of lower limbs, glutes and lower back in order to provide an extra-stiff basis for concentric action levers to function. But remember: the bench press stability system is made of scapular adduction, which is only possible with the highest isometric contraction of the latissimus dorsi (many lifters feel some soreness on their lats after heavy benching), and glute contraction.

Sometimes the “scapular system” collapses – either for lack of technique or because the weight is really too heavy. That over-taxes the glute system and this is one of the situations where you lift your butt off the bench.

Another reason for raising the butt is inadequate placing of the feet. Sometimes the lifter’s feet are placed in a manner that the obvious outcome of leg muscle action is not isometric glute contraction, but knee extension. Therefore, glute raise.

Sometimes it is a result of irradiation, a concept coined by Charles Scott Sherrington in 1906 and later employed by Pavel Tsatsouline. The basic idea of irradiation is that the more intense a certain muscle is activated, the more the central nervous system will recruit neighboring muscles on an increasing and sequential manner. So, when a bencher is struggling on the concentric phase of his bench, all stabilizers will be more and more activated until eventually there will be knee extension.

It is hard to give tips for the correction of repeated butt raises. I struggled with that myself. But here are some ideas:

1. Place your feet a little wider, but keeping sufficient knee flexion to provide the necessary leg drive. In the beginning, this might feel painful. It worked for me.

4. Work on body conscience: with lighter loads, focus on maintaining the balance between the scapular and glute stabilizing systems.

I hope this helps.