The gym as the home: Brewhouse Barbell

This article is a case study partly based on ethnographic analysis about a strength training gym. The goal here is to explore the concepts related to “homeness” on the choice of the training environment. It sets the ground for subsequent essays on alternative training settings and facilities and the concepts involved in their evolution. This whole endeavor is about the relationships people have with their training environments when training is a meaningful activity.

From here we will deepen our analysis of this case study.

What should you expect to “take home” from this article and the next ones:

Shawn Lattimer led the way to his basement with his baby daughter in his arms. It was clear she was not only welcome, but quite familiar with the environment. The space was neatly organized and had “engineer” written all over it. Shawn is an engineer. While we discussed and practiced benching technique on his competition bench, the two year old played with sets of bolts. She was calculating. Then she came over to bench with us. That was 6 years ago.

The issue became clear as I watched Jay Ashman explaining the need to brush one’s teeth several times a day at Brewhouse Barbell’s kitchen, while I put on my squat boots sitting on the blue bench that nobody really likes for benching. People dress and undress gear and leave the bags there. The bench-that-is-really-not-the-best-for-benching was redefined by the members as gear dressing area. Right behind it is a black curtain. Nobody is supposed to open it without permission: it is the “healing corner”, or Blake’s clinic. “Back there” is Blaine Sumner’s room. Nobody goes there either.

That was the missing link: what I had before me was a deeply personalized relationship with the training space, where different meaningful activities took place unconstrained. It has relevant items in common with the home gym experience reported by the interviewees. However, it has common elements with any “home”.

Matt Taylor, Brewhouse Barbell’s owner, allowed me to use his facility as a case study of the gym environment as a semi-private space, analogous to an actual family home. From here, we will proceed to the home gyms proper. 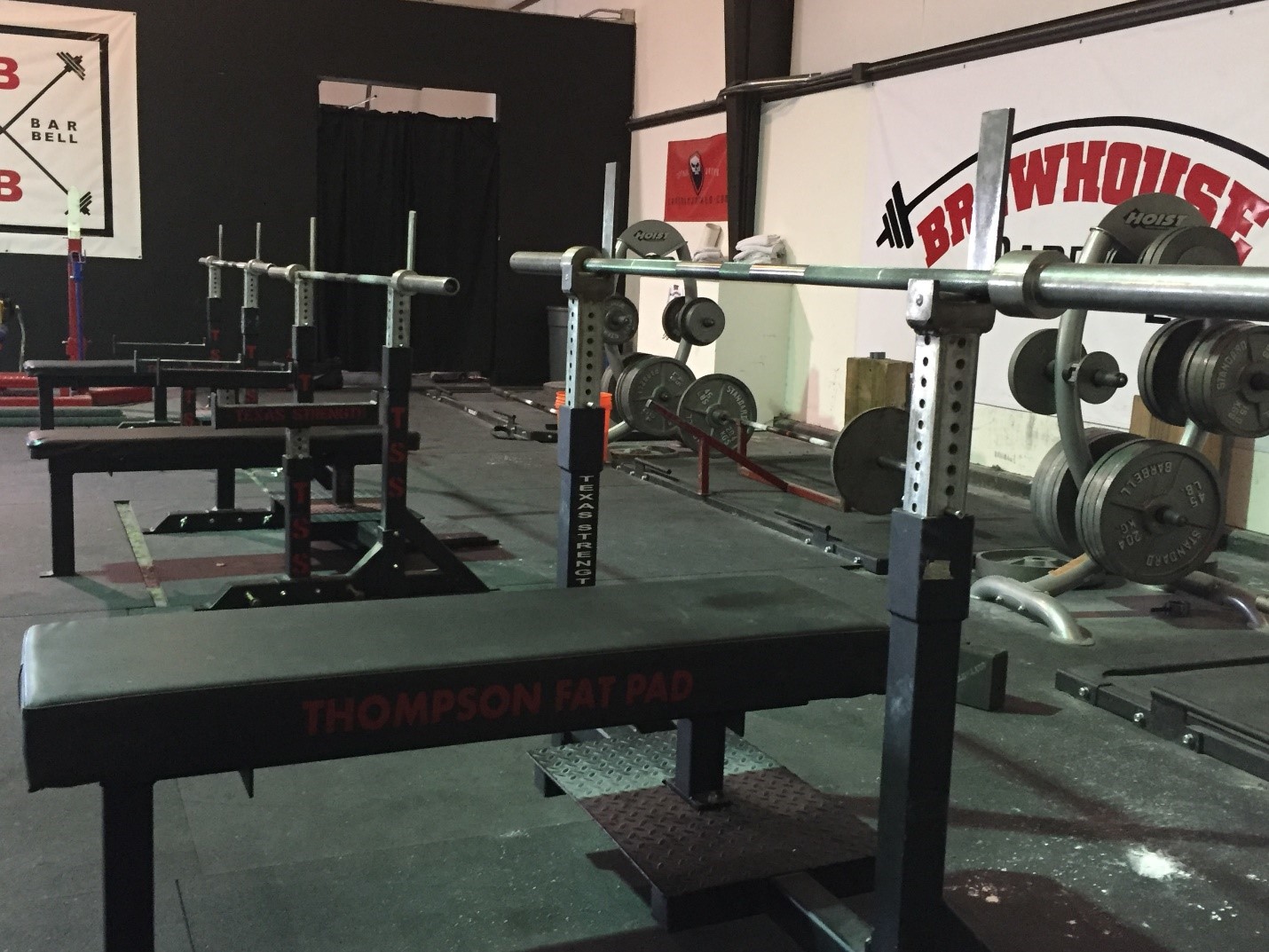 Here you can see the bench and deadlift area and back there, with the red uprights and blue lever is the bench-that-is-not-for-benching. To the right of the banner is Blake’s studio.

If you, like our interviewees, feel that the commercial gym you are going to is not exactly adequate for you, ask yourself: why is it so:

The comparison with commercial, especially chain gyms, is important here because most of the home gyms are a result of an individual’s dissatisfaction with that environment. Commercial gyms are not “evil places”. They are commercial facilities designed to satisfy certain consumer needs. To accomplish that, it must be as impersonal as possible, otherwise it will compromise the goal of satisfying the economic niche because the consumer universe will not be as wide as possible. It cannot exclude any potential client. In that sense, everyone will feel at the same time free to perform and coerced to restrain himself.

But why is it necessary to establish a personalized relationship with the environment for our training needs? To answer that, we need to qualify training. For athletes and people who have a specific emotional relationship with strength training, training itself creates meaning. It is a “meaningful activity”. A meaningful activity necessarily happens at a “significant place”. Another name for that is “primary territory” (Smith 1994).

Now we have a starting point for this discussion: all along, we are talking about how a certain activity determines relationships with the space, objects and other people.

Let us observe the table below with four different classification systems for inter-personal distance and interaction, as well as space systems: 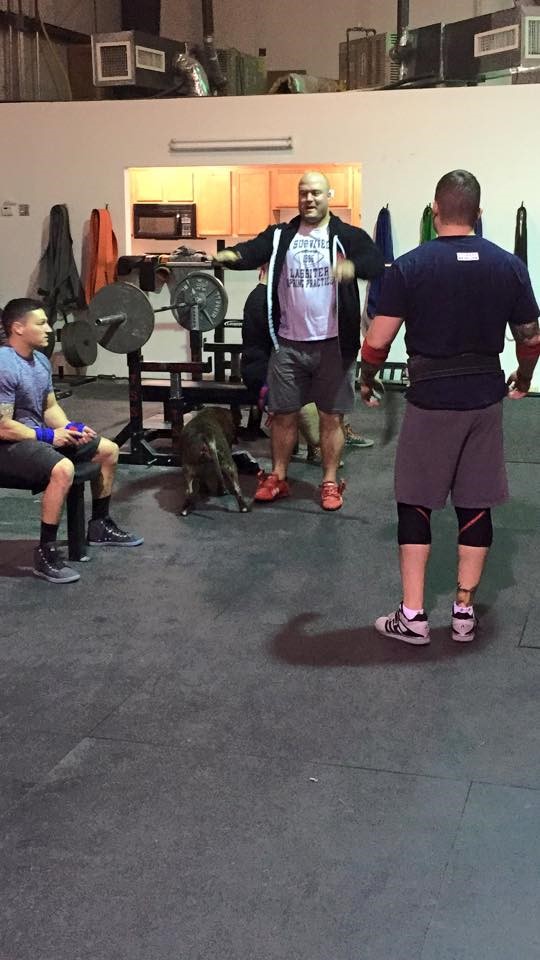 Brewhouse members discussing a bench press. Observe the dog and the microwave oven on the background. There is also a profusion of personal gear, chiefly slingshots and wraps, on the kitchen counter.

Brewhouse Barbell is a warehouse gym in Oklahoma City. It was founded this January/February. It has many power racks, benches, atlas stones, kettlebells, prowlers and many other items of the regular strength training menu. 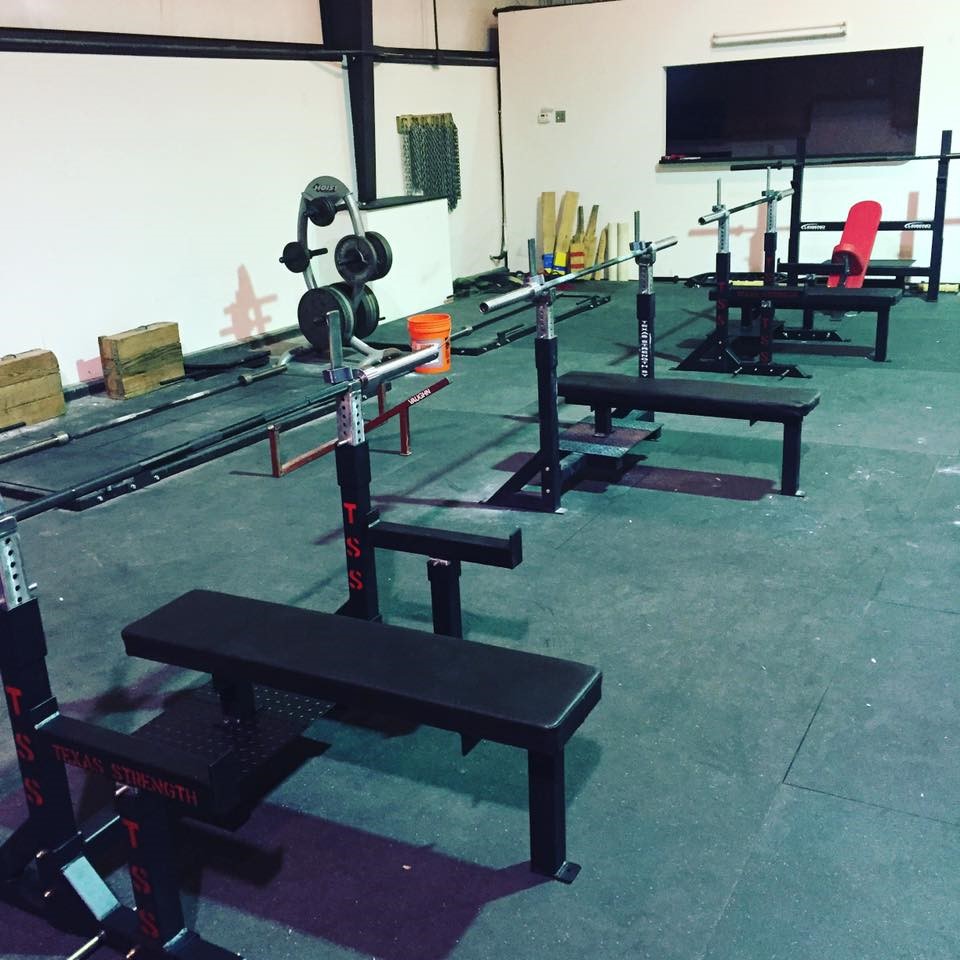 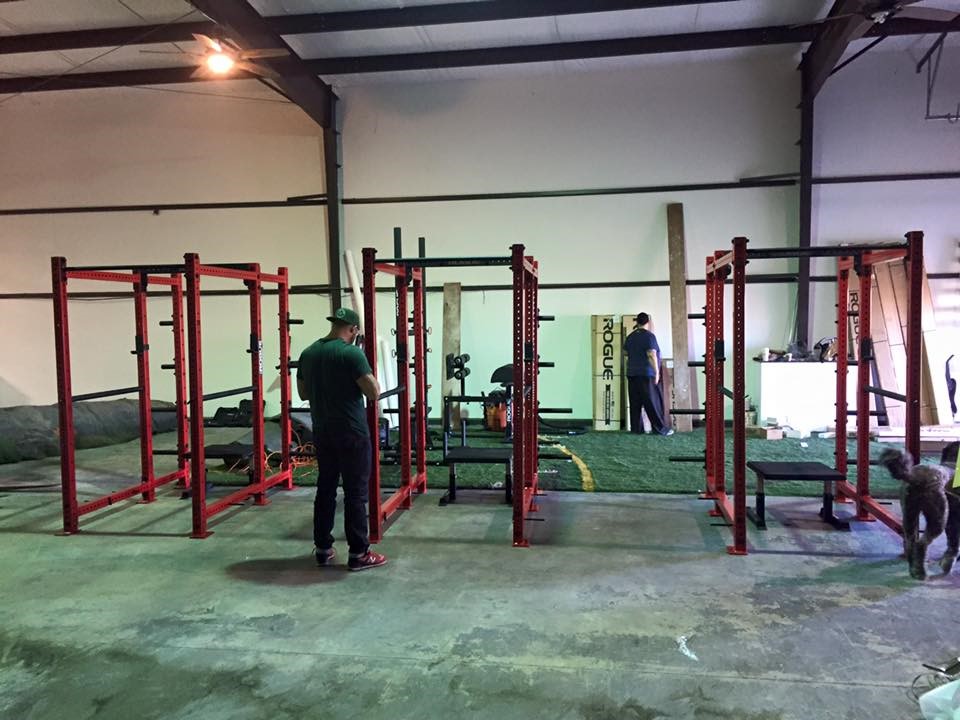 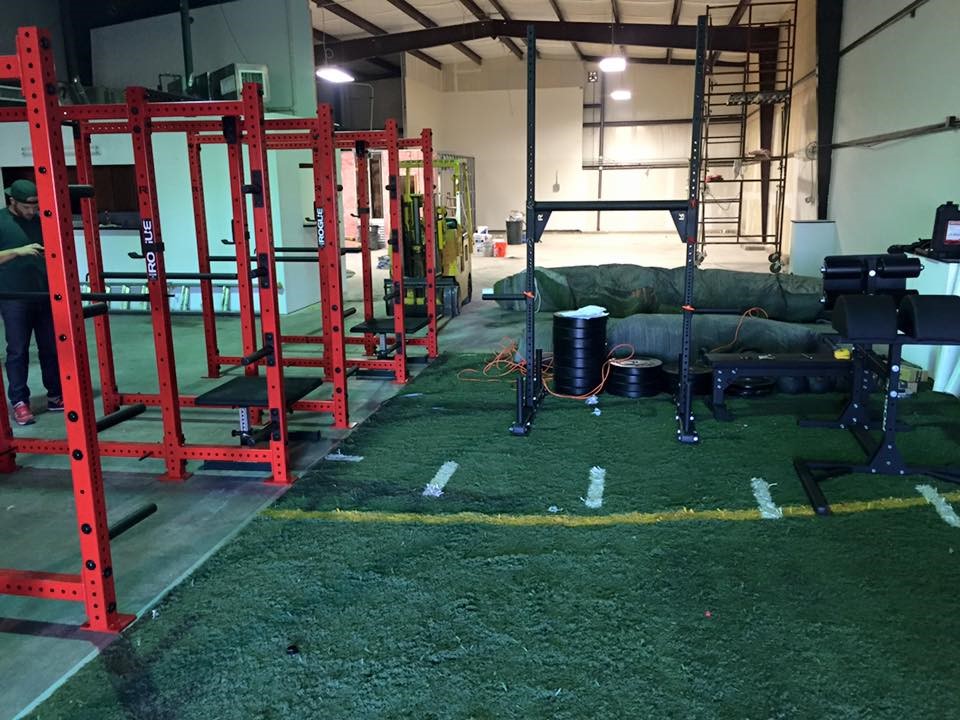 All interpersonal classification systems suggest Brewhouse Barbell, our case study, to be an environment where the space is personal, peri-personal, semi-private and home-like. The typologies define types of occupancy, interaction, non-verbal behavior, communication and code-setting.

The first thing to look at when studying a gym-that-looks-like-a-home is how and why it was formed.

The origin of Brewhouse is a small gym called 405Barbell in Moore, Oklahoma. 405Barbell was owned by a person we can call a “network node” (Otte & Rousseau 2002): Chris Thompson. A network node is a person from which many ties originate, structuring the group.

“The previous tenants of the building were a local brewery. Previous to BrewHouse, I was a member at 405Barbell in Moore, Oklahoma, owned by Chris Thompson. 405Barbell was a very small space, was going out of business, and I decided to “buyout” Chris, and take his equipment to a new facility.” (…) There really wasn’t a strategy for bringing specific people together, we knew we had about 10-15 members from 405Barbell that would come with us, and we focused on there from word of mouth and attracting like-minded individuals (Matt Taylor )”

This original group had established the foundations for a home-like-gym: a set of shared values, a safe place for the building of identities related to the strength training and sports world (Dupuis & Thorns 1998, Reynald & Elffers 2009) and a sense of continuity, stability and permanence (Tognoli 1987). The founding of BHBB itself was a subsequent act of providing such continuity and permanence.

Up to now, BHBB’s growth has been exclusively organic, forming a community (Douglas 1991). It guarantees control against disruption of its original collective identity. It also guarantees that whoever comes in is incorporated into a community with its own set of values, codes and structured time.

“I look fondly back on the time I was barraging Matt with texts so I could get into Brewhouse ASAP and he let me in to pour stones late one cold sunday night in early Feb.” (Mark Wissler)

“Blake’s role is whatever he wants it to be. To be honest, I haven’t really met a human being like him: someone so intelligent, hardworking, and who leaves behind a trail of fans from his work. But at the same time, he does what he wants, when he wants, and how he wants. So I created the opportunity for Blake to use the office as his studio when he is at the gym and to be able to schedule any clients or members when he wants. At the end of the day, he is truly there so that I am able to keep my lifters happy and offer a service that no other gyms could dream of having (Matt Taylor)”

Who is Blake? Blake Austin is the “resident kinesiologist” at BHBBB. He is quiet, goes about his business in a non-invasive manner and his studio is closed to outsiders by a black curtain.

What does this mean in terms of the “homeness” of BHBBB? We go back to ontological safety, trust and personalization of the space (Dupuis & Thorns 1998). As a participant observer, I saw this happen and I experienced this. I observe how people keep track of where Blake is and turn to him even when they are simply just moving. He is a point of reference in the community.

How different is this relationship than any PT consult area at a chain gym, for example? Blake is permanently present and personally interacts with the members of the community. As Matt pointed out, he doesn’t follow external rules, which is mandatory in commercial, public, impersonal environments.

A network of smaller communities

Homes live in a constant tension of centripetal and centrifugal non-verbal behaviors and interests, in spite of all its organic qualities.

“I would say we have many small families within the BHBBB roof, and I think they created themselves out of blocks of time. The lunchtime crew is a family, the afternoon crew is a family, the after-work crew, etc. From there they share phone numbers and create networks of friends and training partners (…). (How we create order is…) something we are having consistent growing pains about. We obviously have simple rules like: rack your weights, clean up after yourself, last person there turns lights off, etc. (But there are other, less obvious issues, for example: ) In powerlifting you have that group of “I’m super hardcore, I listen to death metal, don’t talk to me, don’t look at me” and that comes with the territory. But if this behavior drives off new members or someone trying it out, (it can become a problem). That is where we need to make sure we are not alienating anyone (Matt Taylor)”

Matt’s role in the community is not the easiest. He carries the responsibility of making sure that the identities of all the people who have on BHBB their home don’t clash and create dissent. These people have established BHBB as their primary territory. Primary territories are a central and profoundly significant aspect of the lives of their owners. As such, they will expect, at some level, relatively permanent, exclusive control and use of the environment. The problem is: this is not possible. Some compromise must be established.

The impersonal way of handling this is using “gym music” in the background and everyone using their own mp3 players and earphones. This not only makes it possible for each person to enjoy their music, but it is also an efficient boundary for social interaction. Exactly the opposite of the requirements of a personalized, protective, identity building environment like BHBB.

There are tensions as there must be wherever we agree to share a space and a project. How to ensure that BHBB remains a place where one feels a sense of belonging, stability and permanence?

“Hopefully, BHBBB will continue to grow organically and continue to add new members. We need members to keep the doors open and lights on, so they are obviously the future of this business. We will continue to host USPA and USAPL meets throughout every year and also promote strongman and highland games events (Matt Taylor)”

The initial drive to create and maintain BHBB, as we will see in the next chapters of this series, is the same as what motivated our interviewees to build their home gyms: the need for an environment where they can safely and comfortably “do their thing”, their meaningful activity.

Unlike a home gym, BHBB is a home-like-gym, a community, and communities interact with other communities. Competition is a central part of this community’s life and interests and it is expected that it keeps intense institutional interaction with the sports its members are involved in.

How this community will defend its primary territory and handle the powerful forces – both conflictive and cohesive – in the sports is another challenge. 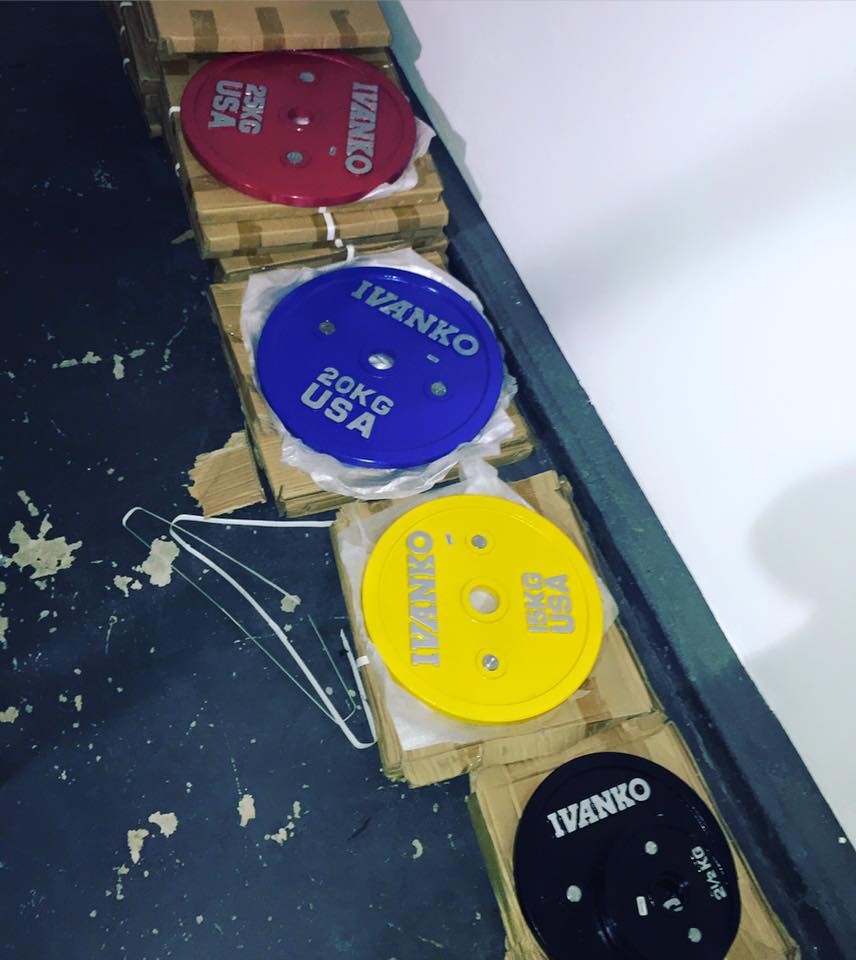 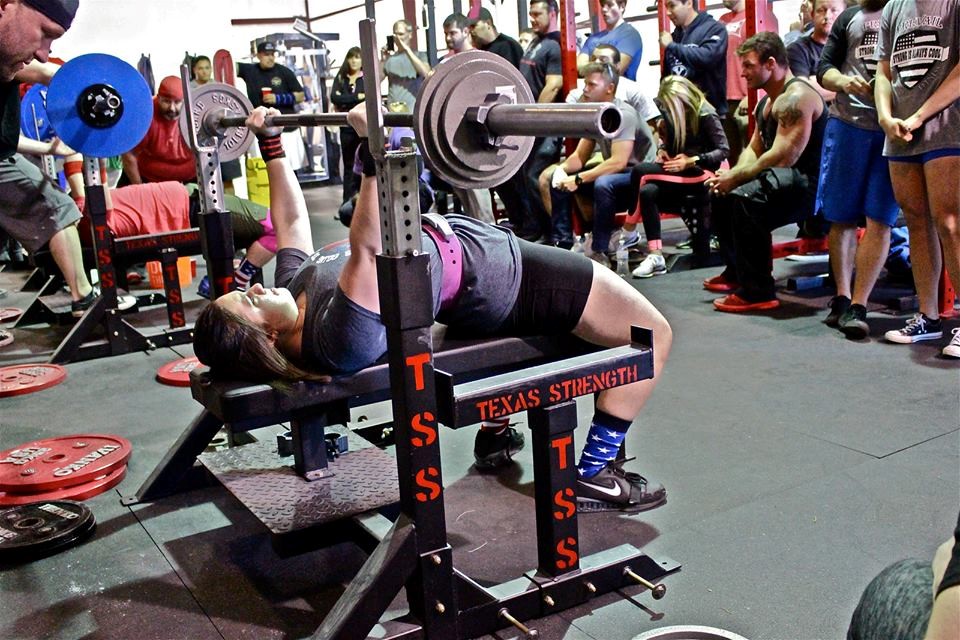 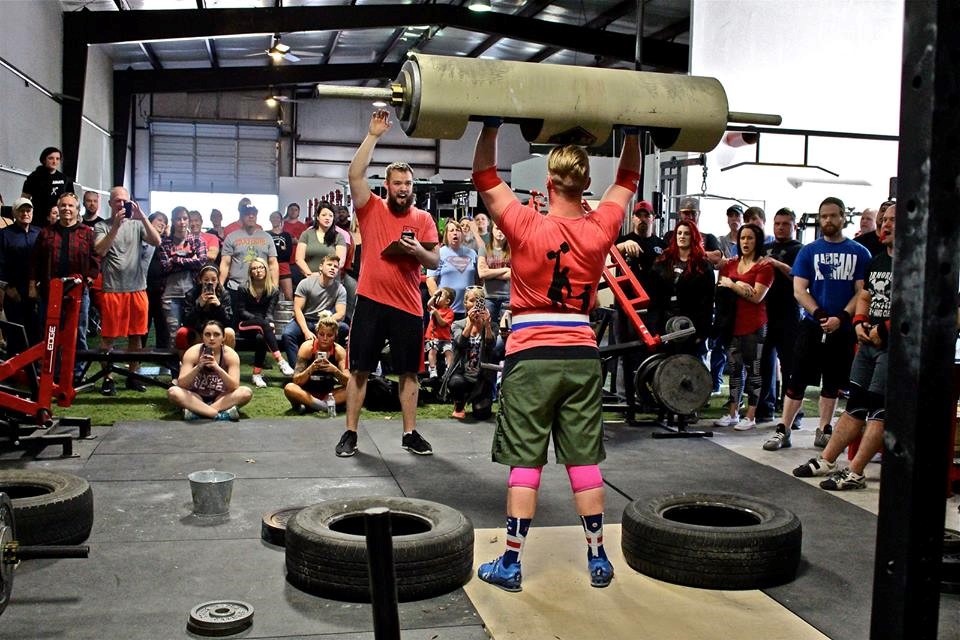