Individual sports sponsorship in marginal sports – what it takes 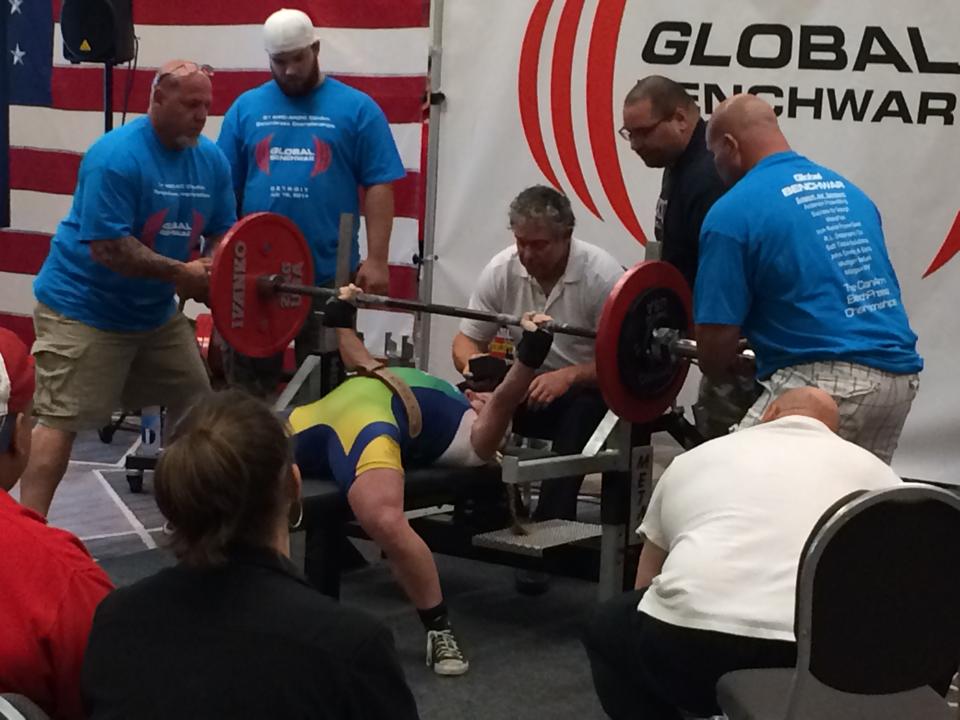 Sponsorship is not about the athlete: it is about the sponsor’s product, service and brand. The truth is that the sport itself doesn’t matter too much. If we are talking about individual sponsorship to an athlete involved in an activity mostly unknown to the public, it should be obvious that the potential sponsor cannot be interested in it, no matter how fantastic the athlete thinks it is.

In this article, I will try to highlight what individual sports sponsorship looks like today in the context of global trends, the major controversial items concerning sports sponsorship for potential sponsors and sponsored athletes and my personal experience with the companies I have worked with as a sponsored powerlifting (what is this?) athlete.

One of the remarkable things about sports sponsorship is that it is one of the economic activities that suffered the least with the recent economic crisis (IEG 2013 Sponsorship Report). In the United States, sponsorship expenditures in 2012 were $18.91 billion and worldwide, $51.1 billion. Sports has almost 70% of these expenditures shares.

Crow & Thode (2013) argue that we are in the beginning of the fourth “era” in sports sponsorship. According to the authors, the first era began in the 1960s and was still a very high risk marketing action where the chief goal was to achieve the highest exposure time for a given sponsor logo in the media coverage of a certain event. The second era would be the 1970s multi-sponsor event system. The third era, starting in the 1990s, is marked by the growth of sponsorship as a major corporate activity. It grew in scope and diversity of strategies. Crow and Thode argue that the “Social Era” has began now. It is marked by the dominant role of social media, shaping both consumer behavior and corporate strategy. It has also shifted the emphasis of corporate sponsorship strategies towards the “social good”, social responsibility and social engagement.

However appealing the trends might look for investors and sponsors, the situation doesn’t look very good for us, individual amateur athletes. One Canadian study (Sponsorship today 2014) showed that while sponsorship investment in other properties were on the rise, investment in amateur sports and causes were decreasing.

More than 50% of all sports sponsorship investment goes to events. A smaller percentage is dedicated to professional athletes. At the bottom of the investment pyramid are the individual amateur non-olympic sports. That is exactly the case for powerlifters, armwrestlers, strongmen, etc.

The problem, part 1: how do we know it is effective

If this line of investment is growing, it must be because it is effective. But how do we know it is so?

Nanji (2013) reviewed the subject and showed that in spite of the many metrics available to measure Return over Investment (ROI) and Return over Objectives (ROO), a substantial number of marketing professionals are not satisfied with the alternatives. Sponsor Map, an important sponsorship measurement research resource, has frequently exposed the shortcomings of current methods.

Measuring brand exposure (Jensen & Cobbs 2014) may be modeled and adequately measured, but what about measuring the correlation between one specific sponsorship activation strategy and brand recognition, awareness increase or attitudes towards brand? These can be much harder to measure, but nevertheless are considered important metrics.

Most of these can, at best, be approached by proxy. At a certain level, return is so difficult to evaluate and indirectly measurable that the sheer cost of doing it becomes prohibitive.

If this is true for well structured activated property such as a public sports event, it gets much harder when it comes to evaluating return with individual athletes. The shareholder company knows that the athlete is a strong opinion maker, but which public manifestation is being translated into greater brand awareness remains almost impossible to determine.

This is where common sense, more often than not wrong, comes in: an athlete from a popular sport will provide higher return than one that excels in a less popular one, for example, is a wrong assumption. Another equally wrong assumption is that sexual cues will automatically generate leads.

The problem, part 2: communication between partners

The study conducted by Rodoula (2011) showed that the shareholders do not perceive sport sponsorships as business investments due to limited information provided by the sponsoring firms. This is just one evidence of impaired flow of information and lack of structured communication channels within the shareholder-sponsorship management-rightsholder-property system.

If the sponsorship management/rightsholder component of the chain (regardless if it is a separate firm or a functional element of multi-function players) is not in full possession of knowledge concerning shareholder strategies and demands, it will be less effective in producing an activation strategy. If the firm lacks an analytical perspective of how the acquired property may be activated in each of its strategies, the same applies.

Which brings us to the real problem: activation. A company may acquire an expensive and potentially optimal property – let’s say a football team, a boxing superstar or the Crossfit Games. If an objective, organized and periodized strategy to explore all the items in the contract is not immediately elaborated, tested and employed, the sponsorship will fail as a marketing action.

Activation is precisely the set of actions put in motion to translate the property’s potential into actual change of attitude towards brand, increased visibility, improved customer response, etc.

Unfortunately, most firms lack the personnel or expertise to activate acquired property in a sponsorship.

The individual athlete in a marginal sport

If this is the scene, than what really matters in the property is its potential for promoting visibility for the right public, adding value to the brand through transfer of specific image elements and communication skills.

Some firms, partially aware of this, are favoring communication skills over athletic accomplishments while selecting sponsored athletes.

An individual athlete from a marginal sport can be a total waste of money or the best investment for a firm, with the highest possible return per invested dollar. It all depends on how good an influencer the property is.

I am my own case study for this thesis. My sport is powerlifting. Powerlifting is one of the two weight lifting sports, the other one being Olympic Weightlifting. Although powerlifting is practiced by a much larger number of athletes, some people see it as a lesser sport. One of the reasons for this is that it is not an Olympic sport. The other is that, for a long time, it was associated to low income, poor educational background athletes and fans.

In powerlifting – both events and individual athletes – the rule is no sponsorship, the exception being small sponsorship chiefly based on barter.

Although far from optimal, my sponsorship situation clearly deviates from this trend. Two companies and three clinics sponsor me: one is a sports supplement industry, the other is an equipment retailer and the clinics are, respectively, an orthopedics clinic, an endocrinology clinic and a nutrition clinic.

As with the majority of sponsorships arrangements in Brazil (and also in other parts of the world), these partnerships were first established on a personal relationship basis, as opposed to active prospection. Social capital, as expressed by the quality of the sponsored athlete’s network, is what determines the kickoff for the initiative.

Also as with the majority of firms that sponsor athletes, there were no clear guidelines for property activation. This is the product of a sports sponsorship culture in Brazil where it is mostly seen as philanthropy.

The first step towards establishing a new paradigm for individual athlete sponsorship was, then, to reject the philanthropic approach. I needed to aggressively showcase my shareholders. Winning championships had to be translated into opportunities to give more visibility to them, while at the same time moving away from the traditional emotional acknowledgements. Some of the strategies I devised were:

1. Producing high impact motivational-like quotes, authored by myself, attached to dramatic competition images in black and white, with the sponsor’s logo in color. The reasoning for this was to highlight cultural sophistication. I worked with the thesis that there would be a symbolic transfer from cultural/education sophistication, through high technical level to the target representation: the product’s high quality. Six such posters were released sequentially up to the week preceding the international championship. Motivational quotes in posters are highly appreciated by fitness practitioners and easily become viral.

2. Creating a video program (“How do we do this”). The program consists of 11 short (8-12 minutes) videos containing technical information about the execution of certain strength training exercises and a three minute explanation about a product (each video with one of the four following products: whey protein, glutamine, BCAA and fish oil). The video opens and closes with the sponsor’s logo and website.

3. Publishing news about my injuries and how the sponsor’s product is employed in the treatment. Consumers are attracted by the technical explanation about the injury and are intensively exposed to the sponsor’s material. At first, my social media followers were more curious than enthusiastic, which is a good indicator: they were not aware before exposure and then they became aware.

4. Online google hangouts (webinars) about the more technical and obscure aspects of the equipment

5. Blog articles with accounts about my competitive preparation, highlighting technical aspects of the diet. The goal was to showcase my sponsor’s expertise to handle complicated metabolic situations

6.  Blog posts about injury recovery, highlighting the need for special care  and the clinic’s approach to it

The determinant aspect of my strategy’s success is just following the well known principle that sponsorship is not about the sponsored athlete: it is about the sponsor. The athlete’s role is to be the best possible spokesperson for the sponsor.

Athletic excellence is just a privileged situation in which to showcase the sponsor. Victory, talent, ethics (good sportsmanship), strength and power, all highly evident in a porwerlifting competition, are values to be immediately transferred to the sponsor’s service or product.

In the next article, I will discuss why the vicious cycle of philanthropic sponsoring and the victimized discourse from athletes sabotages the development of a healthy, meritocratic sponsorship environment that can actually generate leads and attract customers to the shareholder

Changing the Game – Outlook for the global sports market to 2015. December 2011. http://www.pwc.com/en_GX/gx/hospitality-leisure/pdf/changing-the-game-outlook-for-the-global-sports-market-to-2015.pdf

Nanji, A. How Marketers Measure the Effectiveness of Sponsorship and Event Initiatives – November 20, 2013  – http://www.marketingprofs.com/charts/2013/12106/how-marketers-measure-the-effectiveness-of-sponsorship-and-event-initiatives

Volker. What is sponsorship activation? Written on December 13, 2010 http://www.cfmarketinginc.com/what-is-sponsorship-activation/