Intimidation and the Fitness Industry 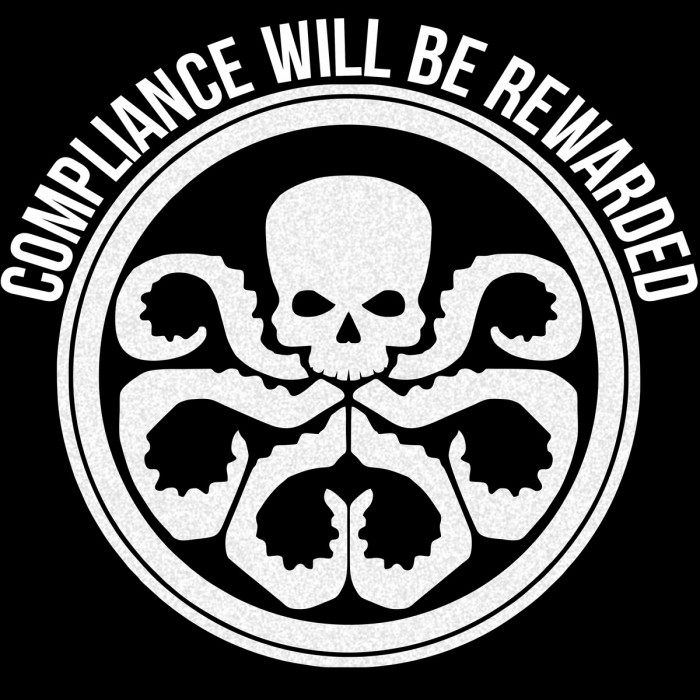 (This article was originally published at www.elitefts.com – link below)

“Your compliance will be rewarded.” (Hydra, Marvel Pictures)

This article is in sequence to my previous article. Its target audience is primarily the gym owner but also health professionals working in physical training in general, sports and fitness environments, and institutions. I hope it may be a tool for you, a gym member, to learn to identify these subtle and not so subtle forms of violence.

“Intimidation” is a strong and ill-defined word. However, it is one that all of us—the professionals concerned with physical activity and health, the gym owners, the athletes, and the community of gym members that is 57 million big in the USA alone—must face, understand and confront. Since the end of WWII, the American government has been aware of the health burden of inactivity and radical changes in food choices. The world was rapidly urbanizing and going through a transition in lifestyle that no nation was prepared to handle, much less treat as a national health threat. In 2004, the World Health Organization (WHO) 57th World Health Assembly (WHA) endorsed the WHO Global Strategy on Diet, Physical Activity and Health (Waxman 2004). The resolution acknowledged that about 60% of the world morbidity and mortality burden was associated with inactivity and poor diet, through non-transmissible diseases such as diabetes, cardiovascular disease, kidney diseases, among others.

By then, the generic commercial gym model had been established. As I explained in the last column, this space was and is heterogeneous and occupied according to a complex set of social relations. These social relations and bonds are made of shared assumptions, goals, and values. Any social group that deliberately or not must interact, if left to its own resources, will evolve into a hierarchical structure. What enforces and maintains such hierarchical structure is either consensus, through rules, or violence (when there are no restraints). Intimidation is a form of violence. In any gym, if no rules are established restricting power relations between members, sooner or later a pecking order will emerge, and with it, violence: , and worse forms of interpersonal violence such as sexual harassment, assault, sexual assault, and so on.

Did it happen anywhere? Does it happen right now? Yes, it does. We just pretend it doesn’t.

In this article, I will offer definitions and a technical approach to the terms involved in this problem. With this, hopefully, I may help you understand the forms intimidation can take and turn your dream gym into a nightmare.

Intimidation is the term applied to a criminal offense in several American states. There are other crimes and misdemeanors that somewhat overlap or are related to intimidation, such as harassment, coercion, menacing, and others. Legally, intimidation refers to acts that communicate to the victim the possibility that they will be harmed if they fail to comply to what the offender wants from them (either to perform something or omit the performance). For legal purposes, such communication can take many verbal and non-verbal forms, as well as physical and non-physical contact.

Most intimidation situations in the commercial gym do not qualify as criminal offenses, although recently there were serious cases, none of which ended up in court because the victims were efficiently intimidated. The important contribution of the legal definition is that it clearly defines that intimidation is any behavior that conveys to the intimidated party that they must comply. In the gym context, it means that there is an unspoken and unwritten code that establishes a hierarchy, a set of values and accepted behaviors. This unspoken code is enforced through intimidation.

Bullying: What Science Tells Us About It

“Pussies,” he says, with a smirk, and walks away, whispering, “fucking bitch.”

Bullying includes intimidation but is not restricted to that. Bullying can include all forms of non-lethal violence over targets to establish and maintain a power structure. We live in a complex society and there are plenty of small niches where behavior is uncodified and unruled. In these niches, formally (or legally) equal members are “peers.” Bullying is therefore also referred to as “peer abuse” (Bennet 2006).

At a gym, intimidation isn’t exerted by the gym owner or managers (except if we consider omission). It is exerted by an unrestricted group of members that import values from several equally negative sources: the false motivational “savage”, “warrior” talk that encourages an unrealistic moral duty to achieve some arbitrary conquest, the falsely meritocratic “rule of the strongest” that ignores that fact that meritocracy is based on specific rules applied to shared activities and goals (and gym members are anything but homogeneous in their goals, or least shouldn’t be, if it is not a sport-specific training center), and, of course and above all, the market beauty standards.

At each gym and local community, the power structure will reflect a specific combination of these elements, frequently associated with racism, bigotry, and other unhealthy behavioral determinants. The strongest predictor of bullying behavior among adolescent football players is the perception of approval by the most influential individual (Steinfeldt et al 2012). This seems to be the case in most workplace, school or university, and gyms environments.

Just like other manifestations of intimidation, bullying is based on a shared judgment of one or more individuals as deserving of treatment that reinforces the power structure. That usually means attacking the one perceived as the weakest or the most deviant by that code (Armstrong 2008). According to this reasoning, it is suggestive that all the angry digital crying rejecting the measures adopted to prevent public manifestation of judgment is, in itself, a defense of the bullying or intimidatory environment. Everybody assesses and judges everything, all the time. What the “anti-judgement” rules prevent is the externalization of that. In short, “don’t act on your profile.”