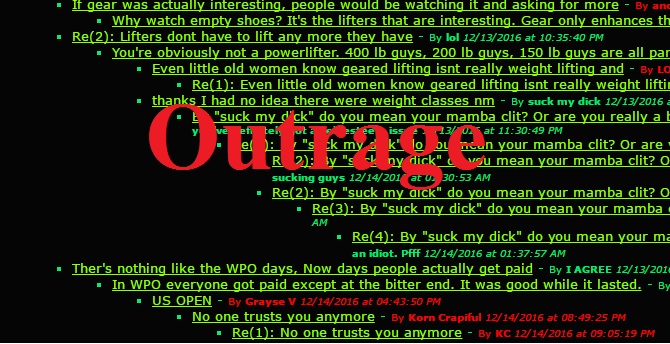 The outrage game. It goes like this (and we’ve all been guilty, at some point):

ORIGIN: a fight, a lift, a meet

Outrage wave 2: sports justice/ethics warriors are outraged by trolls/original outragers and argument against wave 1 claims, still within the emotional vibe.

That’s when cynics hop in and contribute sarcasm. It’s almost irresistible: people are revealing bare emotion, which is delicious.

A week goes by and people forgot what the origin was, but not the bitching content: that is updated on an hourly basis.

Now, pick an uncontroversial beautiful lift or fight. A few hours of praise by a few sports lovers and friends and it’s over. Nobody even remembers it.

It’s a social game. I highly recommend the book below and I even offer a link to its free download

There is at least one social game at play (I actually suspect there is more than one). Both involve validation. Following Bern’s reasoning, we have two players with invested unconscious interests. One says: “I feel worthless and identityless, but if you react to my aggression and I am supported by similar minded individuals, I will help you build your legitimacy through the hatred card”. The other says: “I feel insecure and not absolutely sure if what I do well is something worthy, but if you publicly display your hatred, you indirectly validate me. In return, I will scorn you publicly so that you can build your group identity”. The cynics play another game, a darker one, which I still need to interpret.