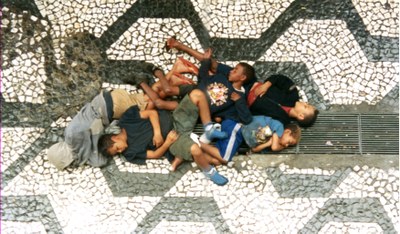 Each person has their own reasons to dedicate increasing time, effort, money and other important resources to something that renders no financial benefit. Sport is defined as institutionalized game and game is an autotelic activity, which means it is an end unto itself. Amateur, marginal sports are that plus more: you don’t get external resources to keep doing it.

There are some classes of reasons why people engage in such activities. For those that relate to it without any material incentive, without it being their only source of identity and social recognition, usually such reasons are hard to describe. Besides that, they evolve and branch.

Which brings me to the story of the Spider boys.

I fell in love with powerlifting before even knowing it existed as a sport. I discovered the lifts and they took me on a long journey from death and meaninglessness to life. During those first days, I had moments of total bliss lifting or even just “doing stuff”. One such thing was taking pictures of old equipment.

One Sunny Saturday I drove to a bad part of downtown São Paulo to take pictures at the oldest gym in the country that is still active. That’s an extremely degraded part of town, mostly occupied by prostitutes, homeless crack addicts and the businesses that grow around that. The gym I visited is right upstairs from a cheap sex shop. It is a typical underground gym today and it does have some of the old weights of its beginning. I had spent part of the morning taking pictures of those and was heading to visit a friend who had undergone a hysterectomy. She had asked me to coach her back into a healthy human, after a long struggle against uterine myoma.

I was carelessly listening to music with my car window open and didn’t see a group of about 15 boys approaching me, aging from anything between 11 to 18 (hard to tell with severely undernourished kids). When the lights were red, one of the smallest ones held to the window, pushed his head a little closer and whispered: “lady, give me your wallet or I’ll slash your throat, do it quick”. I looked at them and said: “easy, let me get it”, and started fumbling into my backpack. A train of thought in my mind started with an ironic observation: a few months earlier I had been accidentally saved from a slashed throat death. Wouldn’t it be funny to die just like that less than a year later? Meanwhile, things came out from my backpack: a COC gripper, wrist wraps, a couple of yogurt bottles and tickets to an exhibition at the snake and spider institute I had gone with my daughter the day before. More random items. I looked at the ticket that had a long legged spider printed on it. Then I looked at the boys, all frail, skin and bones, their little long black arms not thicker than my wrist. As I didn’t find my wallet, most of the boys left, but two remained. One of them said: “ma’am, can we have the yogurt?”. I grabbed the bottles and more food items that I found inside the backpack and handed it to them: “by all means, have them!”. The taller one collected the food and said: “we’re sorry, ma’am… and God bless you”.

The lights were green. The little skinny hungry boys had left and there, at the passenger’s seat, was the ticket with the spider. The spider boys, with long thin arms and legs. Hungry. The underground gym, always at the risk of closing. The food.

As I drove to Ana’s house an idea took shape in my mind: what if these kids could spend some time inside the underground gyms? What if we could give them cheap nutrients on site: milk and eggs, which are already subsidized by the government anyway? I was just one year away from having spent most of my life writing research projects for grants. I knew how to do it, I could write a policy project that would benefit a small number of underground gyms, paying them to hire a coach just to take care of half a dozen kids, plus their membership, some incentive (after all, you need incentive to accept street kids into your house) and money for 30g of animal protein per day, per kid. It is not a lot, but about ten times as much as they had their whole life.

During the half hour that took me to get to Ana, I had it all figured out. Eventually, I wrote and budgeted the project. I had some friends support and embrace it. We even tried to get it into the hands of some politicians, who showed interest in it while in pre-electoral period. Less than a year later I would be writing a much more professional project at a slum, called “empowerment through powerlifting”. I uploaded it to a website and made it available to anyone that wanted to use it: open access. A lot of people considered using it – a couple of municipal administrations. Nothing actually took off, but that is another story of “powerlifting branching”.

For a while, I thought I could save the world with the Iron. You see, I still believed in saving the world until late in life. That is possibly when the sour taste of my past started to catch up with me and contaminate this worldview: all the people that claim to do something for a better world actually couldn’t care less about it.

A few people told me: “you want to make delinquents stronger? So that they can better attack you? They should be killed instead”.

Between that and other failures, my attempts to save the world through powerlifting faded away.

I still remember the spider boys.