The controversial role of the lifting belt

* this paper was published in 2008 as part of the APT lifting series. It is available at other sites and now it is available here as well; the pdf version may be downloaded here

Lifters have rituals, or at least most do. And one high point in lifters’ rituals is equipment. Apart from the rationale behind their role and utility, lifters develop a certain irrational relation to their equipment. In some cases, you can just ignore feelings and impressions and measure the equipment’s effect over the lift (which is rarely done by academics). This is the case for the bench shirt, for example. However much attachment Jane or John have for their black Inzer Phenom, you can usually just subtract their maximum non-equipped (or raw) lift from their equipped lift and you are pretty close to the value of the shirt’s carry-over for that specific shirt, for that specific lifter. As we have seen, measuring a knee-wrap carry-over introduces other methodological complications, as the unequipped deep squat tends to display such mechanical differences as to make the 1RM to 1RM comparison more equivocal.

When we get to the lifting belt, we have additional problems. Unlike other lifting equipment, we have a much larger scientific production and most of it contradicts consensual or “quasi-consensual” assumptions among lifters. A close examination of this literature indicates measurements are done in such a way that the application of the experiment or observation’s results to real life, competitive lifting is at least arguable or in most cases unlikely.

In this article, I will give an overview of this literature according to one recent review (Renfro & Ebben 2006, which basically covers the most important articles in the field), point out evidence that may be useful for us, lifters, show a little of what has been the technological development of this equipment and offer some practical tips from the platform.

What the literature says

A recent review of the literature by Renfro & Ebben (2006) attempted to organize the apparent contradictory results obtained with experimentation/observation of weight belt effect on lifting safety and efficiency. First of all, whether they are done under occupational tasks context or on athletic weight lifting makes all the difference. Apparently, the equipment’s effect over repetitive relatively light weight tasks is qualitatively different than that observed with high loads and few to one repetition. On page 69, there is a table summarizing the results of Occupational Weight Belt Research Studies. The benefits, if any, are marginal and refer mainly to a reduced range of motion at the lumbar area. On page 70, a similar table summarizes the results obtained from Sports Science Weight Belt Research Studies. Most studies point to possible benefits from the use of belts. This effect is usually associated to the higher IAP (intra abdominal pressure), which is thought to decrease disc compressive forces on the spine and stabilize the spine. Both are critical on the exertion of maximum effort.

It has also been proposed in more than one study, revised by Renfro & Ebben (2006), that the use of the weight belt may affect the movement’s velocity. EMG activity shows controversial results, some pointing out to no effect over spinal erector muscles, but an increase in activity of prime movers such as vastus lateralis and biceps femoris. A direct measure of an increase in strength has never been accomplished.

All such studies indicated that there is scientific basis to back the long standing assumption by athletes that the weight belt is beneficial during the execution of lifts. However, studies attribute much less importance to this equipment for the lift than the subjective experience of competitive lifters indicates.

The development of the lifting belt

Weight lifting belts have been industrial items for a long time, as can be observed by the patenting activity involved. The first patented inventions for supportive belts date from early in the XXth century, such as the “design for a belt” (fig. 1). 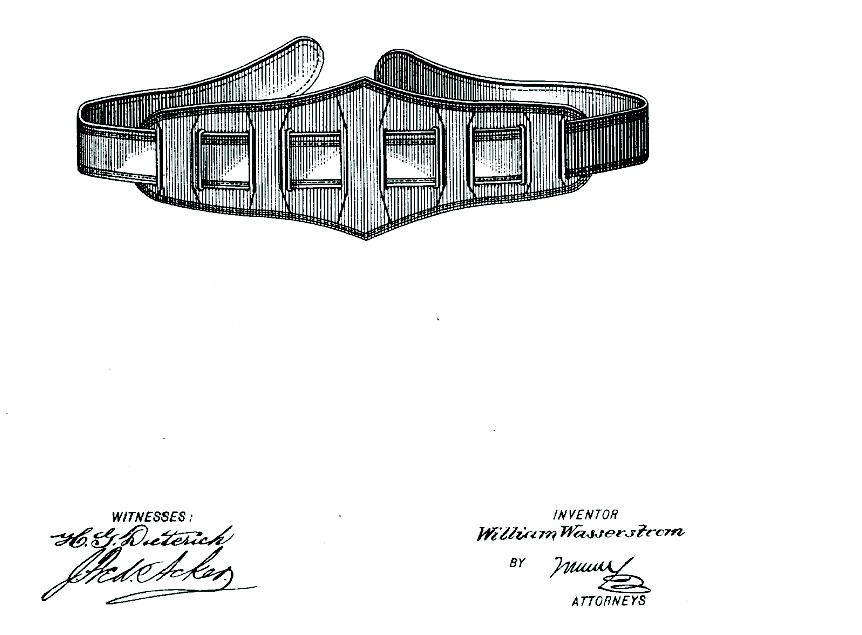 Still early in the century, another invention that addresses the need for extra lumbar support appeared in the late thirties:

None of these inventions either mentioned occupational or sports weight lifting, although they are cited by patents of inventions related to both, being thus their precursors (“state of the art”).

The number weight lifting belts proper increases in the 1980’s, when probably there was a mature market both on occupational injury prevention and sports performance. A variety of new designs and materials began to appear, such as belts made of nylon (Newlin 1987).

One illustration of the commercialization concern is Daniels 1986 invention (figure 3), where the central claim is concerned with optimal utilization of a single leather hide, a direct industrial perspective.

Figure 3: Weight Lifting Belt emphasizing the optimal use of a single hide

Still more complex and sophisticated designs evolved, such as Smith and Greenbarg’s invention (1992), which focuses both lumbar support and IAP increase effects in the lifting belt by creating a “double belt” (fig. 4)

Today, the number and variety of lifting belts can accommodate about any special comfort, health or competitive need.

I have inquired 14 experienced Brazilian powerlifters (more than two years of competitive activity, at least one national title – most are also South American Champions). The reason I have chosen to restrict my survey to lifters from my country is, ironically, the difficulty they have in obtaining imported material. Therefore, many local lifters have their belts manufactured by shoemakers. In spite of the restrictions imposed by federation’s rules, this behavior allows for much greater variation according to the lifter’s preference as to toughness, fastening system, etc. The result is an interesting perspective on subjective perceptions of the belt’s function and comfort for each lift.

One consensus among all lifters is that, for the Bench Press, the belt’s only function is to hold the bench shirt in place. Some of them have special belts made for this purpose, thinner than the usual powerlifting belt (two lifters), and some use ordinary trouser’s belts (two lifters). The rest of them employ their usual powerlifting belt for the equipped bench press, but not for raw lifting.

When inquired about the subjective perception of the benefits provided by the belt use, most mention safety (against injury), stability and, only if specifically asked so, carry-over.

As to toughness, some people have a hard time finding the ideal resistance for their equipment. An excessively tough belt is seen as uncomfortable to some, while belts that are too soft provide insufficient support. Diego Fernando, South American powerlifting champion, pointed out that his solution was to treasure very old tough belts (belts that were once too tough, but with the years acquired the right resistance). Gilberto Silva, today’s record bearer in South America for the Bench Press, points out that he sees no use for the belt besides holding the bench shirt. He considers belts essential for the Squat, though.

Heavier lifters seem to prefer thicker, wider and tougher belts for the Squat. Interestingly, many lifters, even the heavy ones, decline using a belt for the deadlift, claiming the discomfort is too great to provide any benefit. Gilson Clemente (national champion and team coach) pointed out he uses a different belt for the deadlift – softer and looser – than the one he uses for the Squat.

There still seems to be insufficient research concerning the actual performance effects of the lifting belt for the different lifts. In international forums, I have read claims by benchers who can swear belts do provide them with extra stability for the arch. They are a minor population, which doesn’t mean they may not represent an actual phenomenon not sufficiently understood, involving lumbar support specific for the mechanics of their movement.

In any stance, manufacturers should be aware that the actual demands from lifters require a variety of designs and textures. Tougher, softer, wider and thinner belts all have their place in powerlifting. As lifters come in all sizes and weights, likes and dislikes, types of movement and rituals, so must equipment adjust to them.