Into the mind of the coach: Peter Baker

Hi. I was born in Tampa, FL in 1986, and when I was four my father and I moved to Plant City, FL.  It’s a small town, known for Strawberries. We lived in a very small house thing on my grandparents’ property, and it had no rooms, other than a bathroom.

In 2007 when I was still in college, we moved to Brandon, FL. My father was engaged to what is now his fourth wife (she is married to her fourth husband, as it were).

Now, I live in Tampa again.

As a child I was a fat, smart assed know it all. I played sports, but wasn’t remarkable. I was pretty decent as a goalie in Pee wee soccer. I also dabbled in basketball and baseball. But after a while, baseball terrified me because none of the kids could pitch worth a shit, and I would get hit a lot.

I was more into sleight of hand magic, and I managed to win 2nd place at the Florida state Magician’s Convention in 1997. And not long after that, I started playing guitar, which I still do.

As a kid, I was a fan of Bo Jackson. I didn’t know why I was, though. I think it was the “Bo knows best” commercials or whatever.

Now, I like him because I can see the raw talent he had before his injury.

I am a huge fan of pop culture. I think that and music are the realms to which we can relate to the most amount of people. Religion as well.

In fact, my degree in college was religious studies, and one of the things my favorite teacher always taught and spoke of was the relationship of religion and popular culture. In sociology they call it a functional definition, since it is defined as what it does. So in the case of fandoms—starwars, star trek, bands with huge followings—functional definitions serve to define the “thing” based on what it does. So in the terms of both religions and the fandoms, they unite people under common threads.

In powerlifting you see it. Especially with the people who ride the nuts of the USAPL. In Jiu Jitsu, you see it with people who are devoted to anything gracie, anything gi, and eschew anything. You see this with people who hate Eddie Bravo. But all the best personalities do this in any industry for marketing and the purposes of gaining followers.

I didn’t do much with sports in highschool. I was a theater kid. I even entered college as a theatre major at first.

In 2006 I thought it might be a good idea to train people. Later, I realized I could really help people with it.

In 2008 I started a kettlebell club at the University of South Florida, and it still exists under new leadership as the “Church of Steel and Stone.”

In 2010 I got into contact with my two coaches, Adam T. Glass and Frankie Faires, and what I learned from them then and now was a game changer.

My family supported me. My father always believed in me. He let me play guitar in the one room house late at night while he tried to sleep just so I could progress.

Basically, I wanted to train people and when it was time to get fired from my corporate job, it was officially time to start that dream.

I am currently inactive from any competing at the moment. But I plan on doing some more meets in the future. Right now, I don’t push competition on anyone I coach, but if they want to, or if they might be really good at it, I may suggest it. I have a few people I am helping in that regard.

In any competitive endeavor I tried to treat it just like a training day.

I approached powerlifting that way. I tried to keep a clear head and not get all screaming mad (I tried it once as a way to make fun of Layne Norton since we train at the same gym and it zapped the shit out of my energy).

That being said, making progress in every gym session became the norm, so it extended to competition.

I am taking a bit of a break to build the business, but I will go back. My last and best meet I totaled 1205 in the 181lb class. I actually weighed 174 wearing jeans and a hoodie, but decided not to cut any weight.

I wound up squatting 430—I almost got 460 but I jumped the “rack” cue, benching something dismal and deadlifting 520. 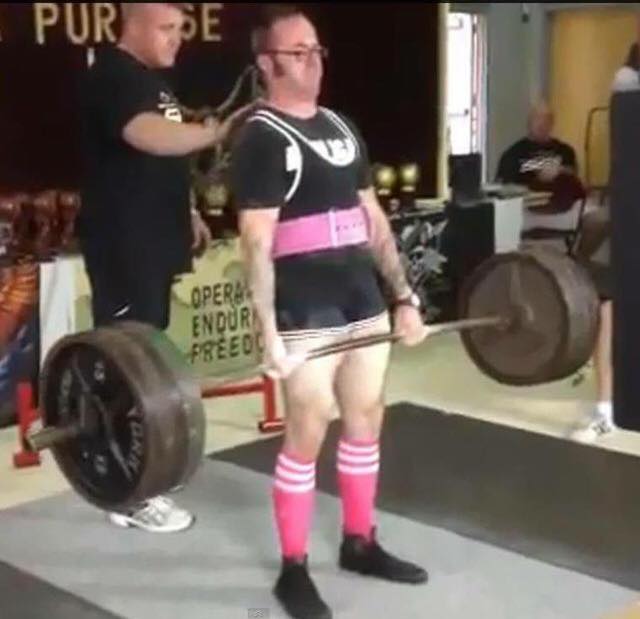 Like I mentioned above, I got a degree in religion. It didn’t help me at all, other than being really enjoyable.

The sport and culture thing is interesting. It has many religious dimensions to it. I mean religion has caused people to kill, but so have soccer matches. Some sports are so big that people riot after them.

It’s pretty sad that such intense emotions are enacted so poorly over something the fans have no control over.

At the end of the day the athletes still get paid, and the plot of land you live on is still going to be there and move on.

But yet people are still entrenched by it. Even if their team is fucking terrible (people in my town still love the tampa bay bucs).

But personally, I don’t follow many professional sports. I keep an eye out on MMA sometimes.

I started when I was 28. I rented some space in Tampa, and my first client (and still a current one) was a guy who wanted to lose weight. At his worst, he was 500lbs.

I first gave him some general advice. He used it and got down to 377.

That’s when we started meeting in person for coaching and now he is 263lbs. Off blood pressure meds because his doctor said he didn’t need it anymore. So really, he helped me the most. I gained a lot of confidence.

For powerlifting, Ed Coan. Nice guy, big fan of listening to his body. For Jiu Jitsu, Rob Kahn. A real New York smart ass, but a very good player who seeks to make everything as useful as possible.

I also like Louie Simmons a lot. A lot of what he does and says falls in line with the way I do things. Specifically, progressing in variants of lifts if you’re training for powerlifting, and not doing the same old shit all the time.

I also can’t say it enough, but Adam Glass is the shit. He was and is a Steel Bender, Grip Athlete, Veteran in the United States Airforce, a Calisthenics master, and most importantly, a fantastic teacher and motivator.

Some are good. Some are idiots. I think that’s about everywhere. I used to read T Nation all the time years ago, and even then—less so than now, but still noticeable then—there were different coaches writing different things that contradicted something the site hosted.

So, when it was time for me to learn, my coaches Adam and Frankie—especially Frankie—made a real emphasis on motion. One of the first things we learned when studying with him are the bones in the skeleton, and the terms of motion in which they move.

That was the minimum we needed to know. And I think communicating in those terms makes teaching movement a lot easier.

Move what needs to move when it needs to be moved. Otherwise, start where you are.

I would say it always does. It’s always a good reference point and from there you can see what works (or doesn’t) for a student.

Biggest challenge for me is explaining how to move to people who have lost the majority of their ability to do so in the most basic ways.

Specifically, I train a person who has little to no voluntary movement. Due to a TBI, he can’t speak. So even with him, we have to find out what he can do that particular day and go from there.

We are making some headway on his movements. Training him to keep his head up, move his eyes and head, and add in new directions when applicable.

And there are some cues I can use from him to let me know if things are ok, or I should stop.

Thankfully, I haven’t made any yet, but I will hopefully have many years ahead of me to do so. But hopefully I keep my good streak going.

The focus on motion makes it vastly easier to communicate with Occupational and Physical therapists. Ironically, communicating with personal trainers becomes vastly difficult.

But it is all the same. Start with where they are. Move what needs to be moved when it is needed.

I train a few special population people—elderly, morbidly obese, and gentlemen with the TBI. Otherwise, there are the people who just “want to get in shape.”

The choice of movements to practice is different.

It is to meet them where they’re at. Not everyone is going to respond well to that drill sergeant schtick. If you can’t adapt, either get the fuck out, or refer them to someone else.

Some of them do demand extra emotional work. And really, that is more important than the physical work.

I don’t ever want anyone I work with dreading their visit for any reason. And I don’t want anyone to dread food, or exercise.

The challenges are what you would expect. Not everyone can go on and on about things, or describe things accurately. Thankfully, we have things like youtube and facetime. Makes things so much easier, because to do anything, I need to see them move.

It’s all the same to me. Part of that is also helping develop that persona to gain a following. But I try to keep it all together. Makes my life easier.