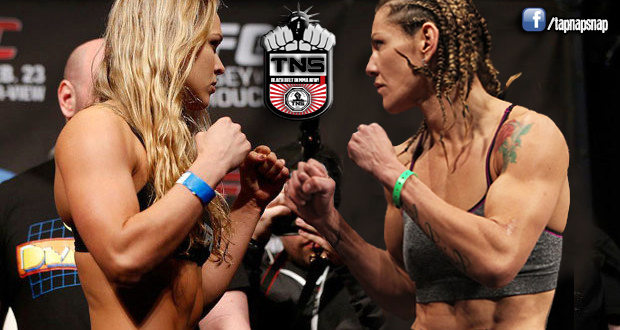 As of today, nobody actually knows if this fight is ever going to take place. Dana White, UFC’s president, denies having negotiated the possibility at this moment, which included Cristiane Justino’s commitment to make weight at the 135lbs class. Justino claims she was offered the fight. Rousey is quiet.

Whether the fight will actually take place or not is irrelevant for the other aspects of a much more complex conflict: the cultural clash.

Rousey is considered the greatest female MMA fighter today. Unlike a large percentage of high profile fighters, Rousey doesn’t come from a socially disadvantaged condition, rising to stardom through fighting talent and luck. She is one of the four daughters of Dr. AnnMaria De Mars and to understand this cultural clash, we must understand Dr. De Mars. AnnMaria De Mars has multiple degrees including a Ph.D. in educational psychology and others in applied mathematics. She was the first American woman to become a judo world champion and today she is a college professor, technology executive and consultant. An accomplished intellectual and athlete who became successful in business through technical expertise – not a fortune obtained through a professional athletic career. Ronda Rousey is AnnMaria’s third daughter. Dr. De Mars is a highly committed Native American activist, having herself written several grant projects for Native American programs. Dr. De Mars was Vice President of Spirit Lake Consulting Inc., a Tribal Institute based on the Spirit Lake Tribe Indian Reservation and was actively involved in the Tribe’s Education and Vocational Rehabilitation programs.

Born to a family where merit based behavior and ethics was expected in all aspects of life, Ronda didn’t need to succeed in fighting to be someone: her role model, AnnMaria, was enough to provide an example that anything done with excellence was a reason for reward and pride.

Her sharp remarks about women in society, about merit in sport and the role of education in a civilized world come naturally to her. She also naturally responds empathetically to suffering with acts that are clearly not rehearsed by her marketing agents. One example was her effort to raise awareness to apraxia, a condition she might have had as a child. She learned about it during an autograph session when a mother handed her a folder about the disorder, timidly suggesting that Ronda might have had the same condition as her daughter. Hours later, Ronda posted a picture of the folder on her own social media and made a call to action to raise public awareness to the disorder. Another such occasion was when she donated US$30,000.00 to a Brazilian non-profit that helps children at risk through sports.

When Floyd Mayweather threw a condescending remark on her direction, telling her to “call him” when she managed to make as much money as he did, she just replied that he could call her when he managed to read one elementary school level book from cover to cover. In one sentence, she sent a message to the world about the true value of knowledge and education. Other accounts have her replying that a jab from him could only come if they ended up dating, in an obvious reference to his domestic violence history. Coming from a home like hers, such remarks come natural: it is not artificial or played.

As to Cristiane (Cyborg) Justino, there’s a big silence concerning her early life. Published facts about her begin when she is already a professional fighter and are marked by shady behavior or outright dishonorable acts.

She has been provoking Ronda Rousey in the media for a long time. For anyone with common sense or some knowledge of merit-based endeavors, it doesn’t even make sense: someone at the top has no need to go down a step in order to measure forces against anyone. In this case, it is not Ronda who must even consider such a proposal. It is the other’s responsibility to show herself eligible for a fight against the top ranked fighter, meaning make weight and apply for the fight.

Originally, both fought in the same organization (Strikeforce) at 145 lbs. After a total of three pro fights, Rousey was already being talked about as a title contender. Rousey then said that she was going to move down to 135lbs and challenge for the title there, which would set up a much bigger fight between her and Cyborg, whom she was not ready for yet. This was also supported by Strikeforce, which had just been purchased by Zuffa, the parent company of the UFC. Rousey won the 135 lbs belt and Justino won her next fight, and then failed a drug test for stanazolol. Strikeforce folded the 145 lbs class. The UFC then formed its first ever women’s division, largely because of the marketability of Rousey. It is noteworthy that Dana is on record as having said that there would never be women fighting in the UFC, and is also on record eating his words.

Something similar to the mediatic provocations Justino is featuring now happened before the fight between Rousey and Bethe Correia – another Brazilian. The fight took place on August 1st, in Rio de Janeiro, Brazil. Bethe provoked Rousey in trashy language, promised to take the American fighter down on the first round and ended up being knocked down in 34 seconds.

The following day Justino was harassing Rousey again, at which time the champion, clearly irritated with the inappropriate insistence, replied that if Justino wanted to apply for a fight, then she should make weight like everybody else by cutting down on steroids. Justino’s use of steroids is no secret: she failed tests and her side effects are quite visible.

There are two symbolic fields underlying the technical athletic aspects of this scenario: in one side we have a dynasty of strong women, based on the values of merit and compassion, and on the other we have a shady universe of drama, glamorized opportunism and upstart.

Fans are known to love blood and behave irrationally. Elements of ambivalence are everywhere, with admiration and envy, love and hate dictating every move of the crowds. Rousey’s fan club is not made of individuals who share her values. It is a heterogeneous crowd as ambivalent as any other fan club. In fact, given Rousey’s origin in what French sociologist Pierre Bourdieu calls the “symbolic elite”, she will be easily hated for resentment against her condition.

Justino speaks to the core of Brazilian culture, where the “self-made” celebrity is applauded and dishonest behavior is not only accepted, but glamorized in mythical types such as the “malandro” – a folklore character who dwells in the fringe of legal society, taking advantage of whoever or whatever he meets.

A fight between these two women is also a clash of cultures and values. It is a fight between a world of merit, ethics and compassion against one of opportunism and dishonor.

Bethe Correia: I’ll Knock Ronda Rousey Out In First Round Of UFC 190

When We Asked Ronda Rousey If She Had Apraxia of Speech

The history of Rousey and Justino between Strikeforce and UFC