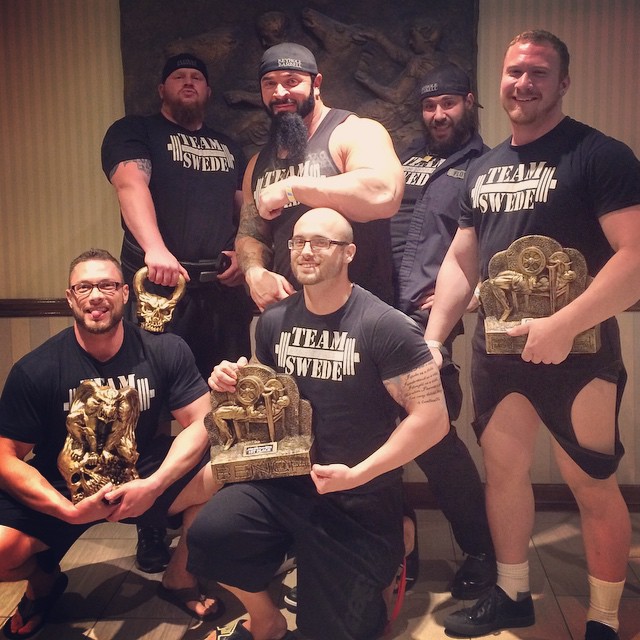 This is the copy of the correspondence between myself and Swede Cory Burns concerning Hugo Quinteiro’s wrapped squats, where we were having difficulty. Since this problem might affect  more lifters and Swede’s advice and explanations incredibly detailed and precise, I am sharing the content as authorized by him.

I reached out to Swede because I believe he is one of the best powerlifting coaches today. Hugo Quinteiro and I would like to express our gratitude to him. He dedicated some of his nonexistent spare time to analyze our case and prescribe a solution. The case in question was a frustratingly small carry-over provided by knee wraps to Hugo’s squat. Swede watched the videos, asked relevant questions, interpreted the situation and suggested a solution. There are few people who I would trust our best lifter and my great friend Hugo with, and the first that came to my mind was Swede. He has a sharp mind, a balanced combination of technical knowledge and experience and is one of the most generous people in powerlifting.

Thank you so much, Swede!

On a side note, when I suggested to Hugo: “let’s ask Swede!”, I showed him a picture of Swede’s team and said: “see? A bunch of Hugos!”

Swede has just published his book – 5thSet for Powerlifting: Methodology for Training and Competition –  which will become available shortly for online purchase at elitefts.com. I will share the link as soon as it is available.

He is the owner of Keyhole Barbell Club, in Apollo, PA, and coaches a large and successful powerlifting team.

We (Hugo, my buddy, copied here, and I) are facing a challenge and we’d like to ask your opinion. Actually, maybe you could even post our doubt publicly because other people might have the same question and it could help many.

Hugo is pretty new to PL – his first meet was in October 2013. He was at the 220lb class and raw. The following year we moved up to 242lb and classic. We had 12 weeks to train with wraps. We used a “general” Inzer and then the gripper wraps (which we call “bee-wraps”). His strong lift has always been the DL, in which he did a nice 322,5kg and got the IPL WR. But his squat was 250kg with wraps. Six months ealier he had squatted 220kg at the 220lbs class. Therefore, his knee wrap carry-over is not that great: only 14% considering only the numbers (and not the fact that he moved a class up).

I was hoping he would now move faster towards the 300kg range, but his last meet was even more frustrating: only 260kg WITH wraps.

We were wondering if you ever saw something similar among your lifters. I had hopes, since many of your boys look like Hugo.

This is a critical moment: 23 weeks before the IPL full power Worlds. We are still in a preparation block, but we need to decide whether to go on wraps or raw now. If we’re to go on wraps, we’ll try other models: I have a collection of more than 20 different wraps.

Okay here are my initial questions for you.

1) how much of the squat training is being done in the wraps?

2) how much work per year is the lifter doing with no wraps, if any? When was the last time a cycle of no wrap training was done?

3) do you have video of any training or competition squatting in wraps?

4) You mentioned that Hugo is getting 14%, or roughly 30 kilos~75 pounds out of the wraps, without considering that he moved up a weight class. 75 is on the low end of “good” in regard to carryover from wraps only, but when we correct for the potential increase of 22 pounds in body weight that 75 pound increase becomes less than acceptable. This leads back to my second question, but do you have an idea of the current raw 1rm for his squat?

Here are some videos:

1) how much of the squat training is being done in the wraps? => Today was the first day we resumed wrapped squatting. We decided to use the long preparation period we have until the IPL Worlds in November to do some solid raw lifting before we re-introduced the wraps. Before that, when we were preparing for Las Vegas 2014, we did all strength day squatting with wraps (including supra-maximal work). Speed day was raw.

3) do you have video of any training or competition squatting in wraps? => he posted it here. Eric pointed out that Hugo does not use that much of elastic strength on the transition from eccentric to concentric. I hadn’t observed that, but it seems so. He also has a significant inclination of the torso during all his squats. We made some changes on his stance and bar hold, but my concern was to get his movement to be more fluid (it looked segmented before). We feel it improved in this sense, but not the torso inclination…

4) You mentioned that Hugo is getting 14%, or roughly 30 kilos~75 pounds out of the wraps, without considering that he moved up a weight class. 75 is on the low end of “good” in regard to carryover from wraps only, but when we correct for the potential increase of 22 pounds in body weight that 75 pound increase becomes less than acceptable. This leads back to my second question, but do you have an idea of the current raw 1rm for his squat? With 3 good reps with 222,5kg, I’d say he’s good for 240kg today. The championship in which he did only 260kg was two months ago. He had done 2 X 280kg in training. That meet was screwed up, I have no idea what happened. They used a different bar and all the lifters had a problem. Anyway, 40kg/240kg would still be 17%. Suppose his 1RM with wraps could be 290kg. That’s a 50kg hypothetical carry-over. Still… ??… I don’t know. Today we went up to 3 X 240kg in wraps. It felt weird. He tried a different wrap – an APT constrictor (the hybrid between strangulator and ZVX). Before that, the Titan THP. He preferred the APT.

Based on everything you’ve told me the video I’ve seen, I believe Hugo’s issue is a very common cause for lack of sufficient carryover from wraps.

So, when I hear someone say “I need more weight to hit depth in those wraps,” my first thought is that they probably did not have enough speed on the descent. I routinely have lifters hit depth, wrapped, in training, with 25% less weight than they will hit in their meet and the same wrap job. That is, first, how they learn the proper technique to use the wraps, and second, how they will develop the special strength required to get the most out of the wraps. When I say “special strength” I am referring to the dramatically different strength curve of a wrapped squat, compared to a raw squat. In order to build the appropriate strength to accommodate this different strength curve, the lifter should do the majority of their training in the wraps.

Depth is not the issue in Hugo’s case, but rather that he is not getting sufficient upward force due to insufficient downward force hitting the bottom of the squat.

So, different issue, same cause

I go as far as having my more advanced lifters perform all of their working sets in the exact gear which they will use in a meet for two mesocycles prior to the meet peaking cycle. If they compete in knee wraps and wearing a belt, all of their working sets during meet prep are performed wrapped, wearing the belt. Specificity becomes very important when carryover from equipment is a priority.

I recommend you do the same, with a special focus on bracing the core during descent and improving downward speed.

I hope this helps. Please keep me posted and let me know if I can be of help in any other way.

Also, in regard to knee wraps, I am a fan of the Inzer gripper wrap, as well as the Lillebridge world record wraps from slingshot. Be warned there is a learning curve with the second option.

We followed Swede’s advice and we are using wraps even on speed days. At this point, 21 weeks before the meet, our focus is adjusting the new movement pattern. This is a video of Hugo’s latest squat.