By Marilia Coutinho in meaning of life 0 Comments 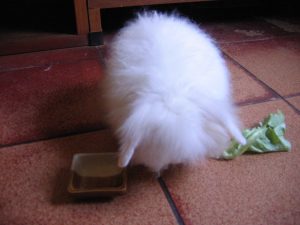 I once had a rabbit. His name was Whiterabbit. He came in a cardboard box with my daughter and her friends. We had agreed we would have no more “inside” pets and we already had three “outside” ones – the dogs. The minute the kids came into the house I protested vehemently until one of them quietly placed the little rabbit in my arms.

About half an hour later I overheard my daughter saying something in the line of “I told you, it was just a question of having her hold the rabbit”.

Whiterabbit became the inside pet. My daughter stayed less and less at home until she moved in with my parents, who live closer to the University. Whiterabbit was my only full time companion.

He had a large cage with the door permanently opened during the day. He went into the cage to eat and use the bathroom. He never even once peed outside the cage. He preferred to take his naps there, too. At night, I closed the cage door. He had an irresistible attraction for wires and cables and I had heard stories of rabbits who died electrocuted after biting such items.

He was a purring rabbit. He made this cute purring sound when he was being scratched around his long ears and he often closed his eyes and slept in my arms. He made several holes in the furniture and sometimes he bit me softly to let me know he wanted more interaction. During a period that I had to spend most of the day out, he stopped eating for many days. We thought he was sick. Actually he was just sad to be left alone. As soon as I resumed my home office working schedule, he ate normally.

Most of the time I just spent a good time with Whiterabbit. Sometimes, though, he reminded me of the sad creatures I had helped to torture many years before, when I was a biochemistry student at the University of São Paulo.

The Institute of Chemistry bioterium smelled of death. Rabbits, rats, mice and maybe other animals were packed in cages and organized in several rooms according to species and type of experiment. Rabbits provided anti-serum, for example. The antigens to be studied were injected in the animals several times along months, until they were killed in order to obtain the anti-sera. Blood was drawn frequently to check for immune response.

As soon as humans entered the room, the animals were terrified. When we approached the cages, they stared at us with wide open eyes and tried to escape our hands.

Rabbits were killed in an extremely cruel and painful manner: they were boxed inside a wooden device that immobilized them, a blood vessel in their ears was slashed open and a vacuum pump attached to it so that most of the animal’s blood was drawn. I was told they couldn’t be anesthetized because that would hamper the blood drawing operation.

Sometimes they made a horrible noise when close to death.

They were often injected with highly toxic and inflammatory substances. Antigens were frequently still in the acrylamide gel they were electrophoretically studied in. An acrylamide emulsion was actually injected intra-muscularly in the animals. Adjuvants were often added to increase the immunologic response. Many animals died before being bled to death.

I don’t recall any relevant discovery made at the Institute in which rabbit anti-sera was the key to unravel the mysteries of nature. There probably was something interesting and a few papers were published. But let’s face it: more than 90% of what was done with the anti-sera was nothing more than “scientific warmup”.

I visited one of New York University’s bioterium, where malaria was studied in monkeys. In one of the rooms, as soon as I looked through the glass window in the door, I saw a female monkey grab her baby and hold it tight against her chest with a terrified look. She had seen me.

Back at the Biosciences Institute, in Sao Paulo, where I majored in Biology, dogs were killed in physiology classes to “demonstrate” some irrelevant aspect of renal functioning. One day, a group of us, students, spent many hours sitting at the stairs in front of the bioterium waiting for a chance to free the animals. They suspected that we were planning that and suspended the class.

Whiterabbit lived four years with me until we suffered an accident. As the roof was being fixed, the people working there disturbed a thick layer of black toxic dust that had accumulated under the tiles. The dust invaded the house. Most of the workers were sick. I was extremely ill, spent a few days with a high fever, diarrhea, other mysterious symptoms and Whiterabbit died of meningitis after a couple of days.

I guess he suffered during the infection that finally killed him. It breaks my heart to think so.

I do know that the years we lived together were a permanent reminder of how incredibly sensitive these animals are, how capable of love and attachment and how unacceptable is the treatment they receive in labs, almost always for irrelevant reasons.

Here are some links to anti-vivisection organizations:

The international congress of doctors against vivisection