Rousey versus Holm and the fighting fans 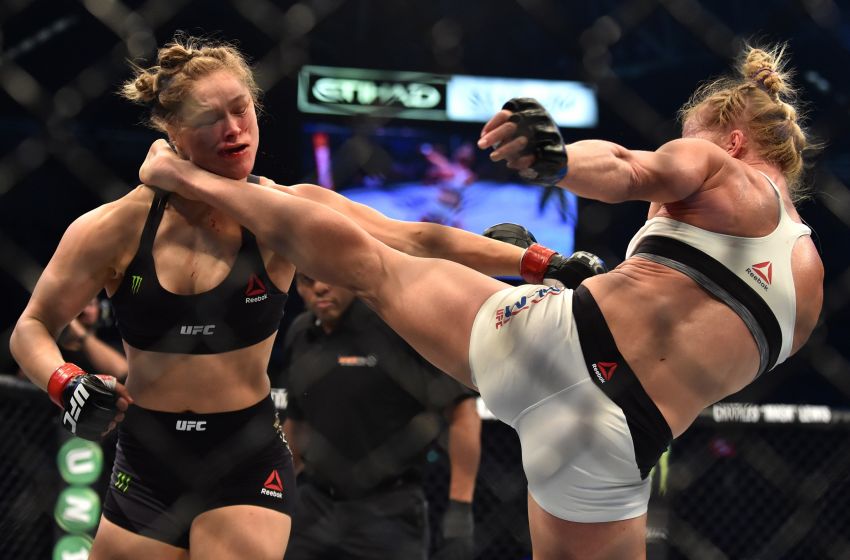 Yesterday Ronda Rousey was defeated for the first time in her career with the UFC in a fight with Holly Holm. As far as very knowledgeable commentators say (and published), in spite of Rousey’s favoritism for many technical reasons, Holm’ victory was no surprise, either: she came in as a world champion boxer who, up to now, had won all her MMA fights.

Being no expert on these fighting traditions, I respect those who are. Most agree that Rousey was on a bad moment of her career, with an unqualified coach and who not only did a bad job preparing her for this (and other) fights, but provided bad strategic advice during the fight.

Holm is the opposite case: with excellent coaching, she also displayed close to perfect “competitive preparedness“, which includes psychological skills. They might or might not have been the focus of professional work: I don’t know. What I saw was a desperate Rousey losing control of the fight not only for technical reasons, but for lack of psychological tools to deal with the many crucial moments that lead to her defeat.

That’s what I saw: two great skilled athletes and fighters with even chances, with a victory that can be traced back to sports science issues.

What I read all over the web was a bit shocking for me at first: a wave of uncontained and obscene pleasure over Rousey’s defeat. On a second thought, it is not surprising: that is how the masses relate to human icons. It is an extremely ambivalent love-hate relationship. They admire at the same measure as they hate the icon, a hate that comes from a misunderstanding of the icon’s supposed superiority “in human terms”. That fact that such superiority doesn’t exist (given the infinite number of variables involved) will never be a matter of public education, or education of the public, because the entertainment industry depends on that false belief. Panis et circensis, with a good dose of sperm and blood.

Maybe the shock came from the fact that my origin is a very small, noble and amateur fight: fencing. I was educated under a strict code of ethics, of which many exist in the martial traditions and are all trampled over by the combat sports industry. Maybe the shock came because my few and only friends in Brazil are or were fighters. I first learned about Rousey from Riccardo Rambo’s comments. He is one of the only people who I can call a true sports coach in Brazil, knowledgeable in the sports science.

Three days ago I was celebrating the fact that my friend and co-worker Andre Giongo finally had one of our earliest dreams come true: he is taking our strength training methodology to the fights on a formal course.

I don’t really know any “fights fans”. Eric Brown, my own coach (yes, coaches need coaches) and boyfriend, who is an ex-fighter with a respectable curriculum, a sports scientist with a noble academic pedigree and a real sports fan, explained to me that the mass of fight fans is no different than the mass of football or soccer fans: they never fought and they actually know very little about the technical aspects of the fights.

According to Eric, this population is mostly male, young and relatively unaccomplished in any field. Again according to him, it is pretty evident that they use the fights digital media to express their own insecurities and frustrations over their masculinity, their professional accomplishments and their “place” in the great order of things, whatever this might be for each one of them.

Since the world of MMA is disproportionately populated by Brazilian athletes, who, in many, if not most cases, have some level of inadequate public and ethical behavior, some things started sinking in on me since yesterday. First of all, it is not the Brazilian unethical behavior that contaminated MMA and promoted cheating, ego trips, unsportsmanlike behavior and disrespect for any code of ethics. It is professional MMA that is tailor-made for people who already behave this way.

Yesterday, I saw Ronda Rousey refuse to touch gloves with Holmes, which baffled me: as the daughter of Dr. Demars, brought up in the martial traditions since birth, this is an unacceptable behavior. A while ago she publicly insulted Kim Kardashian in an act that, in Portuguese, is called “kicking a dead dog”: the lady is notorious for being a social climber with a horrible reputation. No need to claim what everybody knows. Why attack her publicly, where your words can never, ever be deleted? Ironically, the uneducated social climber came out more elegantly than the Ph.D.’s daughter.

I might be wrong, but I believe that what I saw was the sad spectacle of a true bred athlete being diverted and indoctrinated by the ethos of the fights fans world – a shallow world of delinquency, disrespect, cheating, ego trips and media bashing.

I hope she overcomes this episode and returns to her origins.