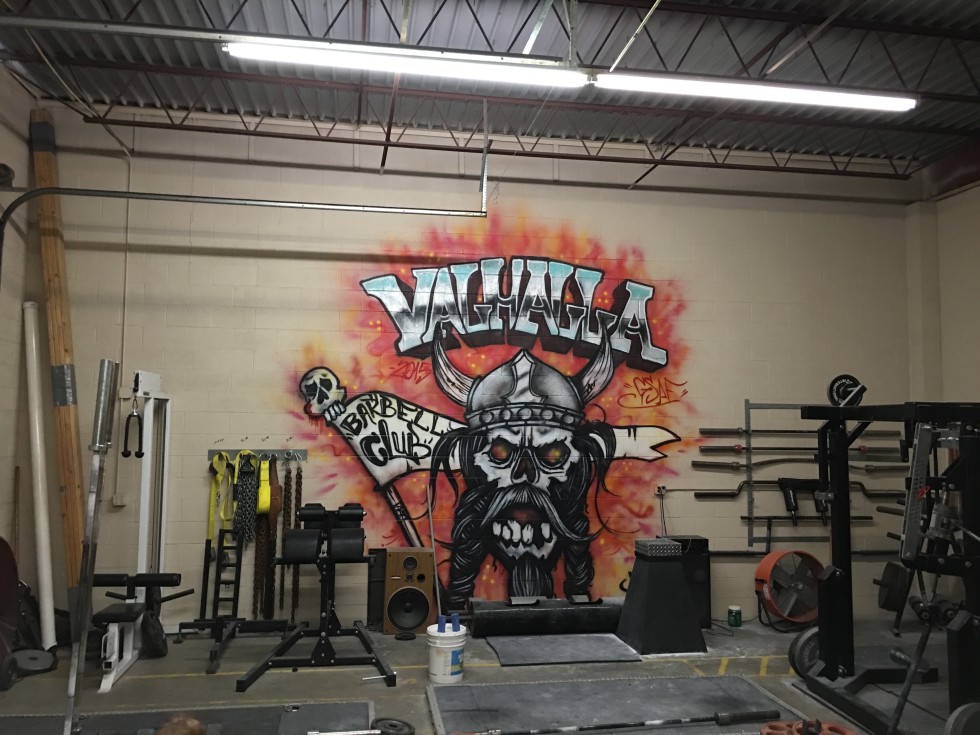 We formed the club in January of 2015. Chad Klaassen and I borrowed/ scraped together enough to money to buy the basic necessities and secure a rental property to get it going. We actually had the equipment order before we had a place to put it, so the search for a space became pretty pressure packed leading up to landing where we are. The initiative came from just wanting to do what I wanted to do when I wanted to do it as far as lifting was concerned. I have never been good with people telling me what I can and can’t do on my personal time and I was very fed up with the corporate gym model we were training in at the time. I didn’t want to lift at home by myself as I had a pretty solid training group at the time and wanted to continue lifting with them, so the club idea fit better than just a garage gym. I wanted a place where we could scream, cuss, spit, bleed, play our music loud, train on our own terms… I approached Chad and Mark Olson about the idea in December 2015 and they hopped on board pretty quickly. The three of us just talked about the things we wanted from a gym and the basic model was constructed over the course of a month in talking and exchanging ideas. The main “idea” of the club was we wanted a like-minded group of people who had concrete goals for themselves in strength sports with none of the fluffy shit that comes in commercial gyms. Not to say that I didn’t form great friendships and meet some awesome people in commercial gyms, just that I had goals for myself (as did my core group of partners) and those goals didn’t jive with the culture that exists in the commercial gyms in our area.

We contacted a friend of ours in Iowa City, IA that Chad went to school with, Brian Collins, that had help form Magni Barbell and just picked his brain a bit about what equipment, building specs, culture they had in mind when forming it and used a bit of what he said to see if we were on the right track with what we were thinking. To be completely honest, the whole start up was pretty organic, we just knew what we wanted and designed everything to fit our own mold of what the perfect place would look like, sound like, operate like and went from there.

The Valhalla community has morphed into a real family. I know that borders on cliché, but it’s true for us, we operate as a co-op at this point and dues are collected and put right back into the gym, we all train at the same time (as much as possible) and stop and support each other when someone is going for a big lift or important set, etc. Our members are myself, Chad Klaassen, Mark Olson, Dal Gains, Drew Tennison, Pat Younkin, Max Petersen, Zach Towns, Heather Klaassen, Morgan Colling, Whitney Williams, Jennifer Bates, Brianna Harris. We are a very small, tight, close knit group and that was exactly the way we had designed it from the get go… I think we have done a good job at sticking to our original design of what we wanted the gym to feel like and I’m very proud of the group we have in there. By chance, we have a very educated group of people in our gym, it wasn’t a goal of ours but many of our memebrs have advanced degrees in science, kinesiology, or exercise science. As far as competitive areas go, we have Highland Games athletes, powerlifters, body building competitors, and soon an olympic lifter.

We started with weights, a competition bench, a power rack, a deadlift platform, a GHD machine, dumbbells and competition bars…. Bare bones. We took out personal loans and used savings to secure the equipment initially and used some connections and a few donations (Jed Tennison, Charlie Rawlston) from family and friends to acquire a little more. We have since aquired a full array of strongman equipment (Joey Grieshaber and Jamie Chanel donation) and some bare bones olympic weightlifting equipment as well as a mono-lift (Marjorie and Robbie Parker donation). We use all member dues to upgrade and sell t-shirts at times to raise a little money here and there… We have our eyes on a few more pieces of equipment and will continue to add to the list as time goes on, being as it’s purely member funded, it does take time…. but what we have is ours and belongs to the group.

We all have our own coaches and programming, included a few members that program for others: Mark Olson, Dal Gains, and Heather Klaassen all design programs and do a helluva job at it. Chad Klaassen also has a unique mind for programming and uses some very cool techniques and ideas. Members have trained/ do train under Phil Stevens, Josh Bryant, Brett Contreras, and Mike Tuscherer to name a few… We have a group text and plan on gym times that way we can all be together as often as possible, it has lended itself to a very great atmosphere and one I have never experienced elsewhere in training at other gyms (although I am biased).

We make decisions as a group, we have a “board” if you will of myself, Mark Olson, Chad Klaassen and we act as sort of a “gatekeeping” crew for issues as they arise… If it’s something small we will handle it but if it’s something large we ask for input from all members. New members are voted on by the group and that has been the toughest task thus far, although we generally agree about prospective members and have yet to be forced to “cull the herd” as most who don’t fit have weeded themselves out fairly quickly. We have had a few who feel that they didn’t fit and have ended the relationship with no hard feelings in almost every case. The overwhelming reason we haven’t taken on more new members is just because of a lack of space at moment.

The pros are pretty simple: we get to do what we want, when we want at our gym (within reason) without fear of repercussion. We train the way want, listen to the music we want, say what we want and have a blast in our “home”. It’s a really great place to lift, learn, and be around friends without any bullshit so we can focus on our goals. We have people that are loud and explosive personality types and people who are reserved types, the atmosphere is one in which you can be who you are and everyone accepts it, it’s a place where our members exhibit a very genuine reflection of who they are and it works, I don’t think you see that at a commercial gym. The cons are not numerous at all…. we have to get enough money to keep the lights and we clean it ourselves, which sucks. The bills and day to day operation costs can stifle adding equipment that we want and that is tough to deal with at times.

We need to expand to a bigger place, first and foremost. I’m working on developing relationships with a supplement store, a butcher shop, and a chiropractic firm to take care of some needs of ours… Supplements, meat, health need partnerships would be big for us to take care of our members in all facets and that’s what I’m focusing on at moment. That’s absolutely the next step for me, providing a few more options for our team and making getting the essentials for success a bit easier/ more cost effective. I would not be opposed to having a few more “focuses” in our gym, meaning, I would love to have a strongman team and an olympic weightlifting team to represent Valhalla the way that our powerlifting team has done so well over the past few years. That goal comes with more space, which is why expanding the space has become vital to me and our members.

We will not operate as a commercial gym for the foreseeable future… and to be honest, as long as Chad and I are financially invested in it I don’t think it ever will, it was never a goal of ours to be a financial investment. I will always strive to keep the familial relationship we all have now and that gets diluted with higher membership. It was never my intention to make money at this, it still is not even on the radar for myself or Chad or any of the other members. Having said that, a more diverse group (as it pertains to disciplines) is a big goal of mine and I look forward to getting strongman, Highland Games, and olympic weightlifting teams off the ground in the future. That’s the main goal now in my eyes, provide a place for people in all disciplines to come and work their asses off in a really cool environment with good people. To add to that, if we can develop relationships with other businesses, as I mentioned before, to help our members be at their best then I think we have hit a home run. I’m very proud of our progress and what we have built thus far, along with my baby boys Magnus and Ulrik, Valhalla is my third child. Lol.

We have a very new group to our disciplines, we don’t have very many people who have been at this for a very long time, in fact, a lot of us our still in single digit competition numbers as far as meets go. I believe that, in the members we have now, we have a lot of top 10 lifters in the powerlifting world (in their respective weight classes) on the horizon. Our men’s team has several on the rise and set to make some huge jumps in 2017 and our women’s team is super talented with a few poised to dominate in 2017 as well, I expect a lot of noise to be made from Valhalla over the next couple of years.