Gainz with just a barbell and a bench 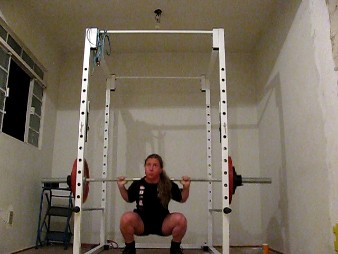 Last week Marilia told a bodybuilder friend about the Powerhouse (her home gym).

So he came to visit and was taken for a tour there. It only sank in on him that what she had was enough for any workout when he actually saw it. A smile shone on his face. He understood he was home, since anywhere you can offer your body the stimulus it needs to keep and gain strength is home.

As we explain in the article about how to simplify and then complicate your training, we base training on three basic movement types: squatting, pushing and pulling.

Among the exercises related to squatting we have:

And of course, any of these can be sophisticated into different stances:

Or broken into different ranges of motion with the use of the power cage pins like:

And, of course, the infinite variety of squat variations:

Among the exercises related to pushing we have:

All of these have variations:

And all their variations:

You get the idea: you can produce all the stimulus you need, plus those you think you need, with only a barbell, plates, a bench press and a power cage.

With our approach to training as movement and not body parts, and much less muscles, it is not hard to create infinite varieties of routines with nothing more than this basic equipment. Which is what Marilia had and this is how she trained since 2011. Since then, she broke several world records, one all time record, kept herself on the first place of the international inter-federation world ranking for the bench press – well, we guess you could say she had fun and success.

Bottom line is: training is not complicated at the equipment end of the story. However, the more simple the equipment, the more relevant the technique.

But that is another story, for another article.